Instagram is on a roll with new features lately, and the latest test involves letting users  ‘regram’ posts from public Instagram feeds to their Stories.

Giant Campus social professor and SGM’s resident social hero, Ben Hawkes, thinks that the new feature has the potential to create brand advocates through easier sharing and republishing of a brand’s content. “This continues a streak of great new user features on Instagram, including the new GIFs on Stories options, which we are very much enjoying here at Sleeping Giant Media,” he explains.

Find out if you have this feature by tapping the share icon underneath a post, and look for the “Add a post to your story” button. Not a fan? Head to your privacy settings to disallow the story resharing function. Find out more on The Verge.

Fancy 157 new emojis? Well, you’re in luck. If your mobile experience was lacking a llama or missing a mango then fear not – your dreams are now a reality. Unicode’s Emoji 11.0 characters for 2018 will bring 157 new faces, foods and animals for people and businesses to make use of in their social media activity.

Sleeping Giant Media are big fans of the use of emojis to enhance our content on social media, with some of our personal favourites being

On World Emoji Day 2017, the LOL emoji (the one with tears of laughter) was announced as the most used emoji on Facebook; the big question now is will one of the newbies top the list for 2018?

Check out the full list of new emojis at Emojipedia, or read more at Android Police. 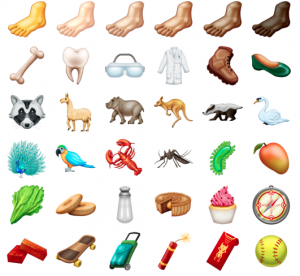 Is digital going to create a generation of social addicts in years to come?

Big tech is facing yet more backlash after former Facebook and Google employees launched a campaign to highlight the potential damage that digital technology and social media can cause – particularly on young people.

The issue is something that Sleeping Giant Media CEO, Luke Quilter, is particularly interested in. “I love technology, but I am also very aware of the negative implications of it. We are constantly connected to it. Great for productivity, but not always for your mental well being – as you simply can’t always disconnect (without a lot of discipline!).

“As a parent of a 1 and 3 year old, I am already thinking about how to ensure that my children can benefit from the positives that technology can bring, but also that they see it as one part of their life – not something that consumes it. Parents need to be educated on how they can help their children have a healthy relationship with technology – which isn’t easy if they themselves don’t understand it,” Luke explains.

Take a look at The Guardian’s article to find out more.

Elon Musk sent a Tesla sports car, but what would you send into space?

This week saw Elon Musk’s SpaceX launch the Falcon Heavy rocket from Cape Canaveral, Florida, in a nail-biting launch. Billed as a risky test flight, with some saying a successful launch was only 50% likely, the Falcon Heavy defied the odds and took off without a hitch, destined to soar into an elliptical orbit around the sun – reaching as far as Mars. If you missed the launch, you can watch the coverage in this BBC article.

Perhaps equally interesting was the choice of cargo – a red Tesla sports car, with a space-suited mannequin behind the wheel and David Bowie playing on loop. That got me thinking: what would the GIANTs send up in a rocket?

Once I sifted out the jokey digs suggesting sending fellow colleague’s personal belongings into the atmosphere, I uncovered some gems. One GIANT suggested banishing coriander, while another wanted to ditch courgettes. Our in-house techies chose ‘poor battery performance’ and ‘timesheeting instructions’, while our big-thinkers went for ‘a DNA sample, to plant the seed for life on other planets’ and ‘one half of a walkie-talkie, in case it gets found and someone starts a conversation’. Check out some of our other favourites below: 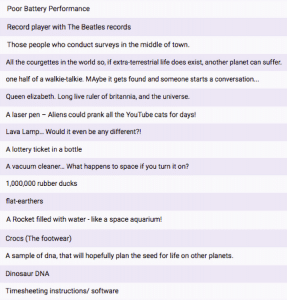 Back in November, Twitter increased its character limit for tweets from 140 to 280. However, Twitter CEO Jack Dorsey recently commented on how the average length of the tweets people are sending out hasn’t actually changed since the increase.

The Digital Creative team, who deliver all of the social work for Sleeping Giant Media’s clients, held a panel to discuss whether or not we use the extended limit. Two of our Digital Creative Execs, Bex and Eliot, said that their usage of characters varies. “I think it depends how much personality you are trying to put in vs how many technical terms you need,” Bex explained, while Eliot said that he still favours shorter content – “although the new limit helps for products with longer names”.

Senior Digital Creative Exec, Ben, thinks that people are used to the short format of Twitter and still, by and large, stick to it. He said: “If you can get your message across in less than 140 characters, or using images, I still think that is best. We typically reserve longer tweets for technical info or story-telling, although it is nice to not have to revise a tweet hundreds of times to make it fit!”

Find out more of Jack Dorsey’s views in this week’s article on The Verge.

New Google Search Console is now available for everyone

The full rollout of the updated beta version of Google Search Console has been released this week, with an announcement posted on the Webmaster blog sharing the news that all sites would now be able to access the update.

Mersudin Forbes, our Client Services Director, said: “Search Console has now rolled out a new beta version, which allows for better insight into indexation and search query analysis. It has also placed AMP features and analysis around AMP indexation and eligibility prominently in the new dashboard. You will still need to revert back to the old version for features such as robots.txt testing and New URL fetching, though.”

The old interface will remain up for the foreseeable future, and you can use both versions for the time being. Check out Search Engine Land to find out more, or head to the Webmaster Central blog to read the announcement in full.