What better way to celebrate your birthday than by taking more than 30 of those closest to you on a trip to Ibiza? 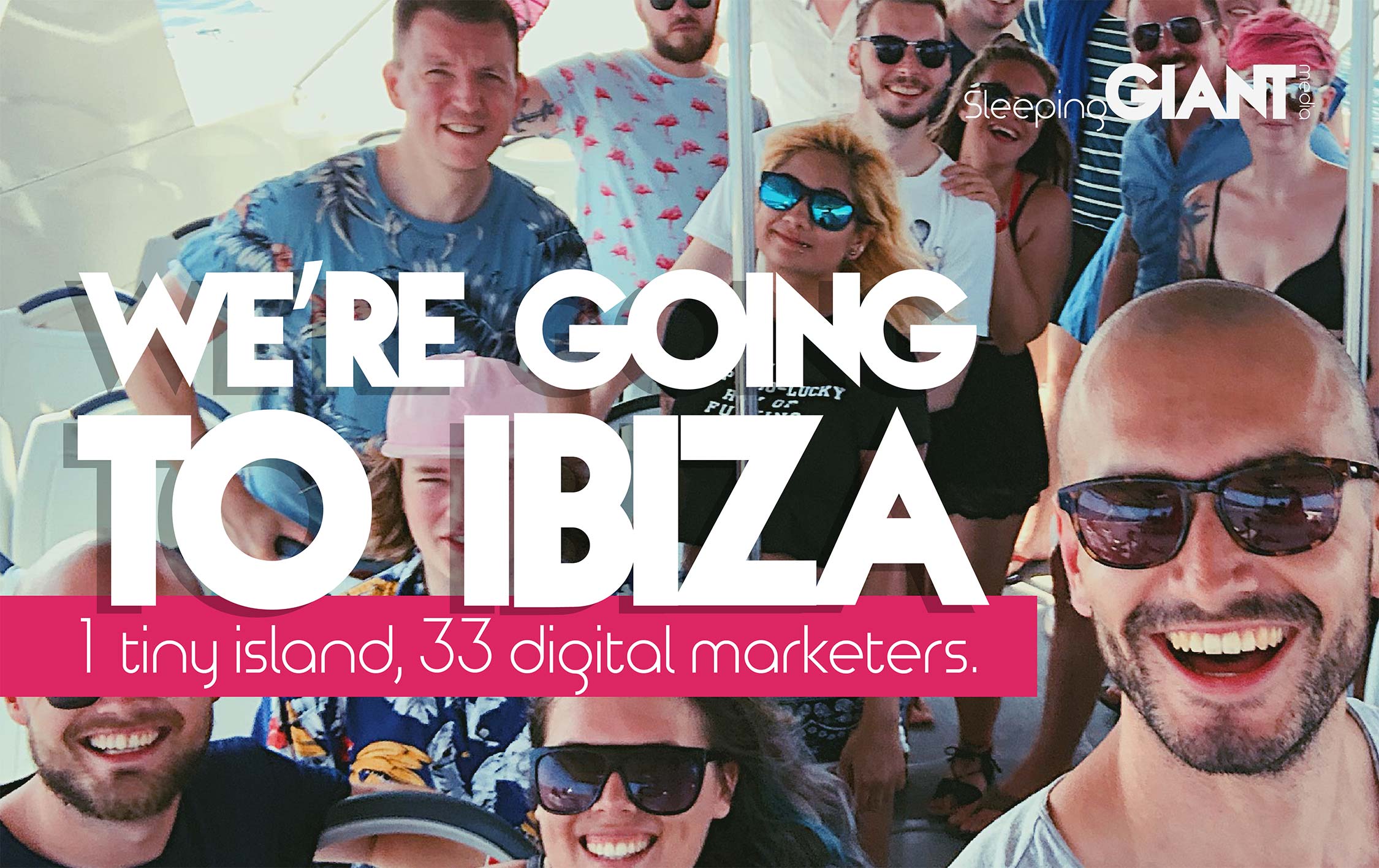 Yep, you heard that right. If you’ve been following our social media channels then you would know we just returned from a long weekend just off the coast of Spain.

As part of the Sleeping Giant Medias 10 year anniversary celebrations that kick off in earnest mid-September, the whole team went on the ultimate team building retreat. A weekend of sun, sand and some sick shapes. What a way to be congratulated for all the hard work that has got the company this far in its journey. And look how excited everyone was…

On Thursday, our giants departed from Giant Towers by Crosskeys coach (thanks guys!), grabbed dinner at the airport, took up an entire plane and got going to the party island. Even the EasyJet pilot joined in the celebrations during the flight (thanks to a little paper note from Amber, how very digital), wishing the team an awesome time and a big congratulations to Ant and Luke for getting the business to ten years.

The rest of the weekend was spent enjoying the pool, the all-inclusive hotel amenities, having our monthly company catchup in 30-degree heat, having an all-evening get together at the beach, exploring the old town, trialling cocktails and just generally chilling out. It’s rumoured that one particular GIANT party spent just over four hours non-stop dancing, whilst others spent just as long trekking a similar step count hunting for jet skis to no avail. Fail!

“We have so much content but, to be honest, the GIANTs have done our jobs for us this week. Go check out what they have been up to on our social channels. Our Ibiza story is now saved on our highlights on Instagram. Or you can hit the #SGM10year hashtag and scroll the feeds” – Danny Windsor

But as much as this trip looks like it was a massive jolly for a bunch of young’uns, it was actually just a way to celebrate ten years of business in the most SGM way we could imagine. If you hadn’t gathered by now that we were slightly unusual in our approach, then you’ve got lots to learn.

An unusual approach to business life or not, why on earth did we choose to go on a huge family holiday? Why didn’t we just go out for dinner or down to the local pub for a beer?

Ant explained:  “Our businesses success is in its people, they are key to everything that we have achieved and if it wasn’t for them and the culture we have developed together, we would not have made it to 10 years. As such, it makes sense to do something extra special. Recognising that whilst at work, we need to give it our all, and the same applies when celebrating our success!”

Luke’s only worry is “what will we do for twenty years?”. Whatever it’ll be, it’s bound to be awesome #SGM20year!

“Ibiza was an incredible trip, it was amazing to spend so much time with such a big group of like-minded people and just have fun… it would have been so easy to write off the idea of a trip like that, because, well, who wants to spend their weekend away with people from work…? Well, it turns out Giants do and we had a blast!

It was a great opportunity to celebrate what we’ve achieved together over the last 10 years and create some new memories for the next 10! I’d do it again in a heartbeat.” – Ant Klokkou

“On a personal level, it was one of the best weekends I have had in a long time, it was so much fun! As a business, I got a chance to spend time with people I don’t often get to chat to in the office. It was incredible to see everyone relaxing, and getting on so well, and taking stock of everything we have achieved over the last 10 years. I feel like I know the team better and I think that will strengthen the team’s relationship with each other, and develop our culture even further.”  – Luke Quilter

We’ve all come back from the trip stronger than we were before, with a stronger sense of community and a newfound respect for each other. Even though we were provided with the opportunity to sit there and ignore each other around the pool, we found we all spent every second with each other, laughing, joking and loving life.

Thanks, Sleeping Giant Media for the GIANT Adventure. Here’s to Ibiza 2028!!