Home > Blog > Why Do People Complain On Social Media? 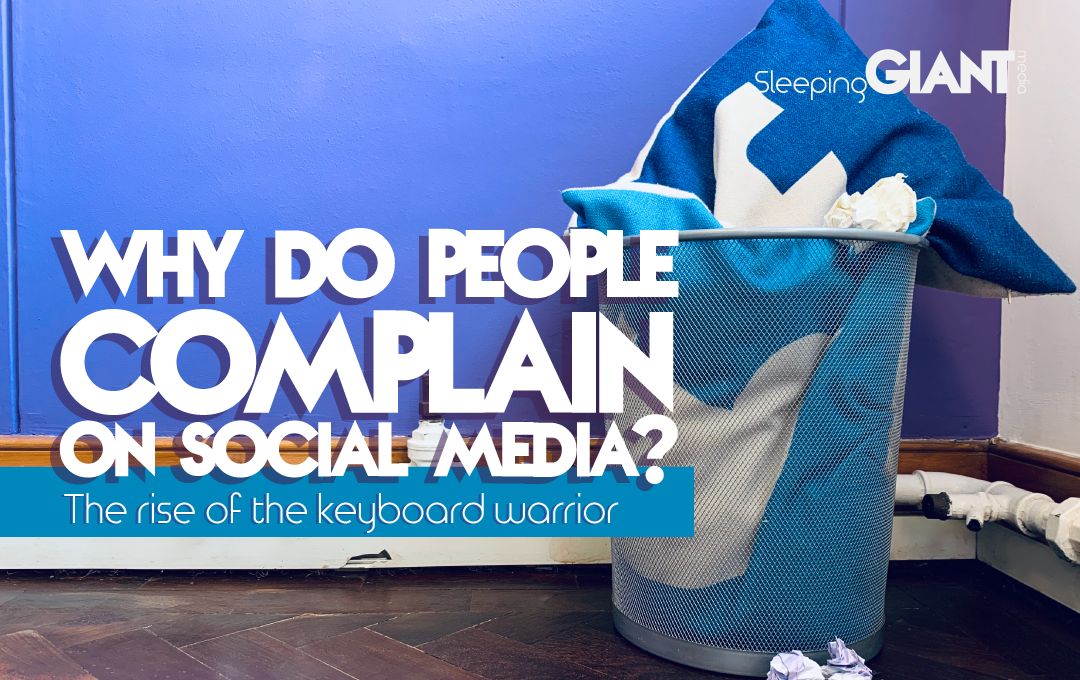 Use complaints as an opportunity for your customer service to shine! ✨

We’ve all been there. Our online shopping order hasn’t arrived, or the packet of crisps we just bought with our meal deal has a disgracefully small amount of actual crisps in. So, we take to our devices, don our keyboard warrior armour, and let our thumbs go to war on the brand in question.

And we’re not alone. Stats show that social media is now a key channel for consumer complaints, with 47% of people admitting to using social media to complain about a business – and that’s just the people who admit it.

You may have heard the saying that “unhappy customers tell 10 people, while happy customers may not tell anyone at all” – and that theory is only amplified online. One tweet can reach 10, 20, 50 or even hundreds of people in the space of mere seconds; especially if it’s a particularly entertaining rant about how a bag of Doritos only actually had 6 whole Doritos in it. Clearly unacceptable.

The rise of the keyboard warrior

While the number of people taking to their smartphones to berate an unsuspecting brand is undeniable, it’s the reason why that gets interesting.

You could argue that people do it because it’s easier, or quicker, or doesn’t involve having to speak to an actual person on the phone (ew – human interaction). And there’s probably an element of truth to all of those. But studies have also shown that people like to complain on social media because they want other people to know that they’re complaining.

A study called The Social Habit found that 79% of people complaining about a brand on Twitter do so hoping that their friends will see it, while 52% hope that the company in question will see it. And only 36% expect that the brand would see their complaint and actually fix the problem as a result.

This research shows that people aren’t actually taking to Twitter in the hopes that their problem will be solved; instead, they want other people to know about the problems that they’re having. This works like a form of social proof, whereby positive and negative experiences can impact the behaviours of other people who hear about them – or in this case, read about them.

Research in Psychology Today found that complainers can be broken into three types: the never-happy Chronic Complainer, the sympathy-seeking Venter, and the Instrumental Complainer, who’s looking for a solution. When it comes to social media complaints, most classify in the latter two – with the top reason for complaining being to raise awareness among other consumers, and the second reason being that a user is in search of an apology or solution.

Can it be a good thing?

If you watched our recent Giant Wednesday video, you’ll know that we covered off the best way to handle complaints on social media. And if you didn’t – well, you’re missing out. Rectify that immediately. Or when you finish reading this blog preferably.

In the video, we talk about some of our top tips for handling complaints, like making sure you reply quickly, using personal responses, and keeping things public. Because when it comes to responding to complaints, you want to get it right. Sprout Social found that no response was better than an unhelpful response, with survey respondents explaining that a bad response to a complaint meant that 50% of them would boycott the brand, 42% would share with offline friends, and 31% would continue to post on social media about it.

On the flip side, if a brand responds well to a complaint, 45% of people will share the positive experience online, 37% will buy again, and 36% will tell their offline friends about it.

As a whole, brands are receiving more messages that need a response than ever before – yet the response rate has decreased. This creates an opportunity for the businesses that are willing to step up and interact with their customers, both good and bad. Don’t be scared of social proof – use it to your advantage. After all, hoards of happy customers shouting about how great you are, even if they were complaining earlier today, is a great marketing weapon to have in your arsenal.