Targeted ads: highlighting the positives in a gloomy situation

In a week that saw Facebook CEO Mark Zuckerberg questioned over their part in the Cambridge Analytica scandal, we’ve decided to look for the positives to remind ourselves it ain’t all that bad.

Targeted ads, a form of advertising that uses a variety of sophisticated methods to target the most relevant and receptive audience, are met with varied opinions as to whether they are a good or a bad thing. Following recent data based debacles, the issue surrounding consumer trust has never been more pressing.

In the last week, you’ll have been living in a cave to have not heard about Zuckerberg and Cambridge Analytica. To briefly recap, Cambridge Analytica, a company that claims to have data types for the personality of pretty much every American, has been at the centre of drama around harvesting and distributing individuals data against their knowledge. Having begun collecting data in 2014, the Facebook-Cambridge Analytica scandal involved the collation of personally identifiable information of around 87 million Facebook users. This data was then used to influence voter opinion on behalf of the politicians who hired them.

People have now called for greater consumer protection and privacy rights online. And, just like that, a lot of people are speaking their mistrust in the way businesses use targeted advertising – some even deeming it ‘creepy’.

But, back to today’s discussion point where I’d like to find a positive amongst all the negativity floating around the news. Maybe these seem obvious, but maybe some of us just need reminding. Alternatively, you can just be like Wetherspoons who gave up on social media completely following a bit of a drama – not something we recommend by the way.

What positives could there possibly be?

For advertisers and marketers, the ROI that targeted ads brings is a big win. There is no doubt that they are a good thing for businesses, other than those who spam and eventually bore users with their pushy brand – but you don’t see much of that anymore, people are getting smarter with their approach.

For example, Twitter’s own data found that 41% of people on the platform bought a product after exposure to an ad in the last 30 days. Great return on that ad spend.

Positive for businesses, check. Now, what’s a positive of targeted advertising as a consumer?

Targeted ads, in my opinion, are really darn clever. As much as I despise being followed about the internet with ads about new Converse, and having Just Eat chase me until I give in and order a curry, I secretly love it. I love having content tailored to me, myself and I. I don’t want to see ads for nappies or dog food, in the same way, businesses don’t want to waste their ad spend trying to get these products in front of me.

I think people often forget that when you join things like social media or sign up to a new app, for example, you do actually tap a button that allows for them to read your interests and basic data such as age, sex, location and device type. A lot of people, and I myself am guilty of this, will just quick-scroll through the terms and conditions and hit accept. If we took a moment out of our time to read the data types they collect from us, maybe we wouldn’t be so surprised every time a scandal like this highlights it and uses scaremongering to put us marketers in a bad light.

Focusing back on the issue of consumer trust, it is important to note how relevant it is to be transparent and truthful in our approach to digital – something everyone shows in different ways. Facebook, for example, is doing this now by pushing their methods of data collation out for all to understand. Similarly, we should recognise the resurgence in the value of relationships between brand and consumer. Alienating the consumer with a high volume of ads and targeted posts is no longer the bigger issue, rather the concern is “how did they know I liked bananas?” as they stare at the third ad for bananas on their social feed that day.

How are they ‘tailored’?

Here are some examples of the ads that follow me about social media, tailored to the information I have willingly put out to the web.

Schuh and I have a love-hate relationship when it comes to the frequency of their ads in my feed. I talk about shoes ALOT and I am often in search of a good bargain. I’ll usually have one or two Schuh ads on my Facebook and Instagram of a day – and I probably click an ad to have a look (and maybe a cheeky purchase) once a week.

I also have a very obvious interest in marketing, it’d probably be a bit awkward if I didn’t. Therefore, I also see sponsored ads for relevant qualifications and automation software that might be useful to me. Better than getting adverts for a veterinary qualification that I really don’t want… 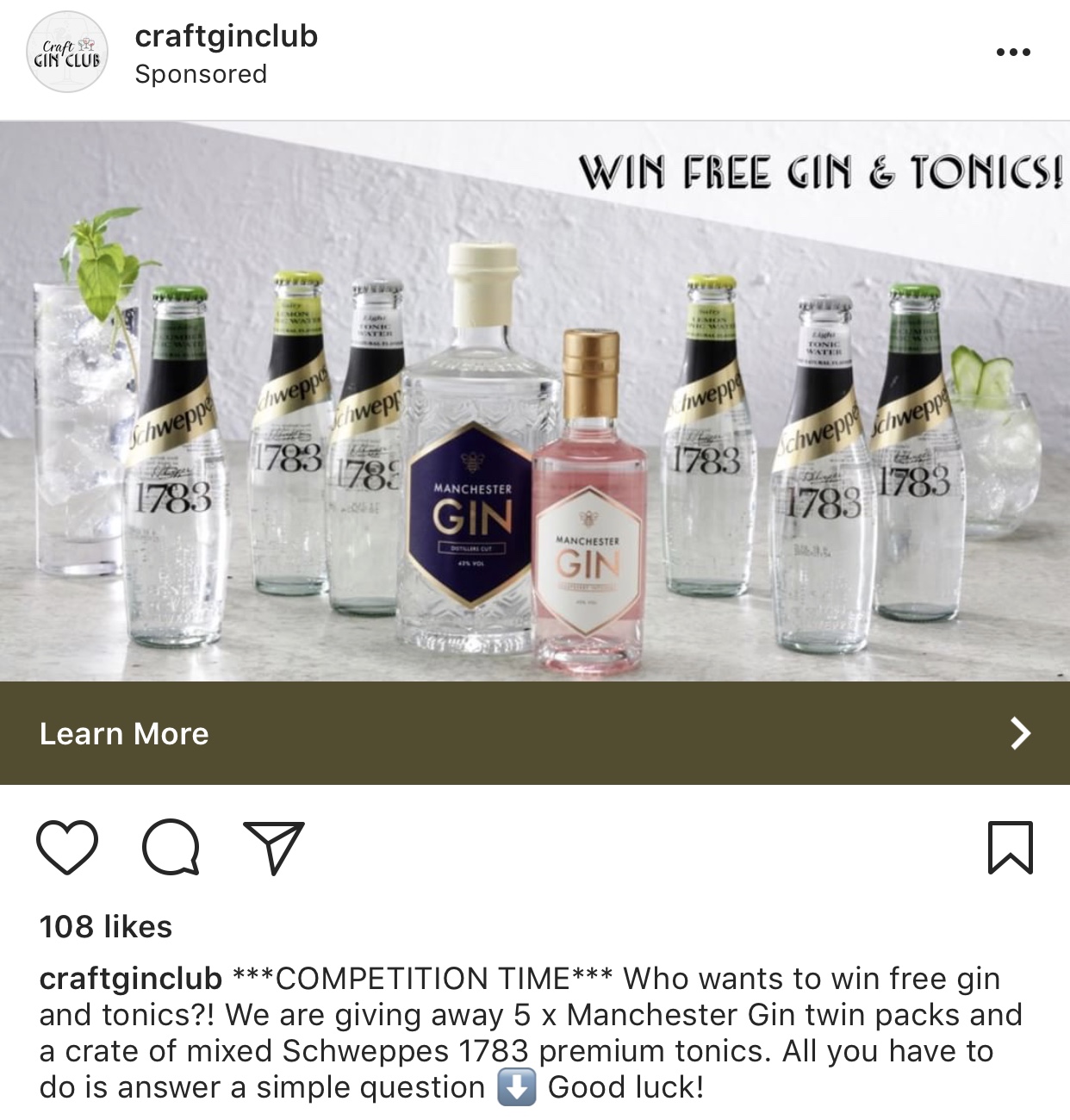 I went out on Friday night and posted a picture of my Gin & Tonic to Instagram using #gin and tagged in my favourite mixer company, so guess what I’m seeing advertised to me today on my feed?

As I mentioned before, I don’t want to be spammed with ads for products I have absolutely no interest in. If you’ve seen one on your feed that you question based on the fact you would never be interested either, you should be aware that somewhere you fall into a category of likes, interests or maybe just an experiment. If you’re a cat person, but you’ve seen an advert for a dog sanctuary, then that’s because at some point you may have clicked like on a post or page about animal sanctuaries in general.

And, for those who are super anti-ad, would you rather we were charged to use these social media platforms we love so much? No? Didn’t think so. One of my favourite parts of the Zuckerberg hearing addressed this:

How platforms like Facebook and Twitter harvest their data is a whole other discussion, but ultimately almost every move you make online is being tracked, and you’ve most likely allowed this at some point. See what data Facebook collects and from where in their latest blog.

Quite simply I think the biggest benefit as a consumer of any type, is the tailored content brought to you through targeted advertising. Positive for consumers, check.

Yes, having data you didn’t necessarily consent to be used in political propaganda isn’t something any of us are particularly happy with. But marketers taking the time to research and tailor content to you, their audience, that’s a good thing right? Finding positives in a gloomy situation.

Let us know what you think in the comments, or try not to be distracted by the tailored ads as you Tweet us.

Want to know more about social advertising? Have a look through our website and get in touch today on 01303 240715 or hello@sleepinggiantmedia.co.uk. 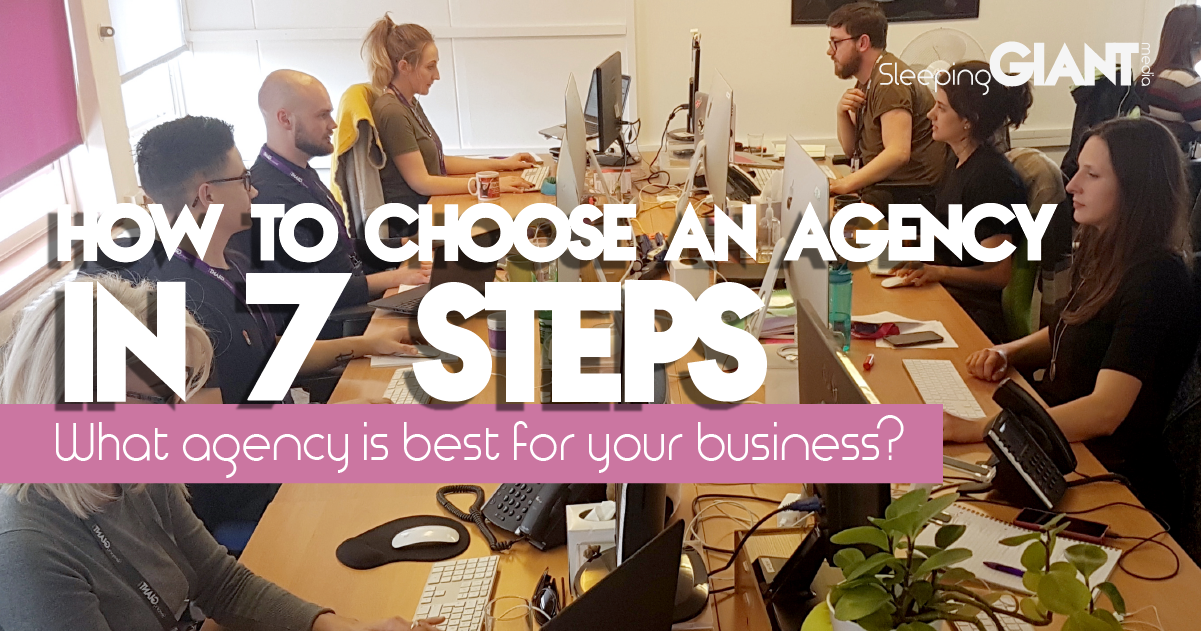 Fancy another blog? Check out our seven steps to choosing the right agency for you.