Last Friday I was in London having just attended an awards event. Afterwards, I made my way across the city to meet some friends, it just so happened that we were meeting in a pub near Oxford Circus.

I stepped off the tube in Oxford Circus and after taking four steps across the platform the announcement came over the tannoy “Due to a reported emergency, will all passengers leave the station promptly”. Deep underground at this point, it was not the most welcome announcement to hear.

I looked at the faces of the people around me, there was a shared look of worry, an audible “oh sh*t” said under their breath, after which people headed straight for the exit.

Arriving at the top of the escalators and heading onto Argyle street it was clear (at the time) that there was something serious happening. The night was awash with blue, flashing lights that dulled the lights of Oxford Street.

At this point, I stopped filming and decided to get out of the area. Networks were instantly struggling to load as everyone headed online for more information. I called my business partner who then became my direct connection to any information that was breaking.

For the next 30 minutes or so I was caught up in various different crowds who were running from the scene. Fortunately, it turned out to be nothing, but I can honestly say it was one of the most frightening 30 minutes of my life. Mainly caused by the complete lack of information available to try and decide what would be the best course of action.

Obviously, there was panic in the air, but this was a panic partly caused by the people who were relying on social media for live updates.

There were countless tweets going out on Twitter. But here you can see how an influencer got caught up in spreading fake news to his millions of followers: 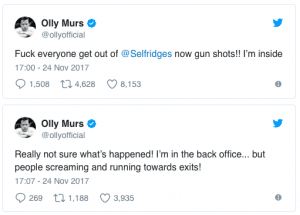 Now I love social media and the power it brings to everyone, giving everyone a voice and place to share. The trouble associated with that power is trying to distinguish between the real and fake news shared by media outlets and citizen journalists. All of which just leads to situations escalating, just like the one I was caught up in.

In a situation where you can retweet 1 of 2 tweets: One saying “it’s all fine” and the other saying “I heard gunshots fired, we are hiding”, I would guess that most people, caught up in the moment, would repost the most exciting one to feel part of that moment. This then creates an echo chamber of similar content, getting further and further from reality.

When you are on the streets of London with people running around you, you simply don’t know what reality is at that point in time. There is no surprise that panic will, and did, ensue!

I’m not talking about necessarily a digital solution, but old-fashioned announcements on TV sets and through speakers in the streets could possibly help get accurate information out to the people that need it before they get caught up in the excitement and fear of the event unfolding around them.

I would love to hear your thoughts on how we can get more accurate information to those people who need it. How do we address the dilemma that social media has created without taking away from the amazing benefits that it also holds within?