The Basics Of Video Editing In Adobe Premiere Pro

The Basics Of Video Editing In Adobe Premiere Pro

If you want to know more, get in touch today 😎

When you load up Premiere Pro for the first time – did you have the same reaction as us?

When you open Premiere Pro, it can look very intimidating, but don’t fret – let’s talk you through the basics of making awesome video content.

There are loads of other choices of video software out there, but Premiere Pro is the weapon of choice for me. DaVinci Resolve, Final Cut Pro, iMovie… believe me, I have tried the rest… for me personally, Premiere Pro just works the best.

So let’s start with an easy step – open Premiere Pro.

We’re running Adobe Premiere Pro 2021 on an Apple Macbook Pro, but Premiere has the same layout on Windows computers, so you’ll still be able to follow along. 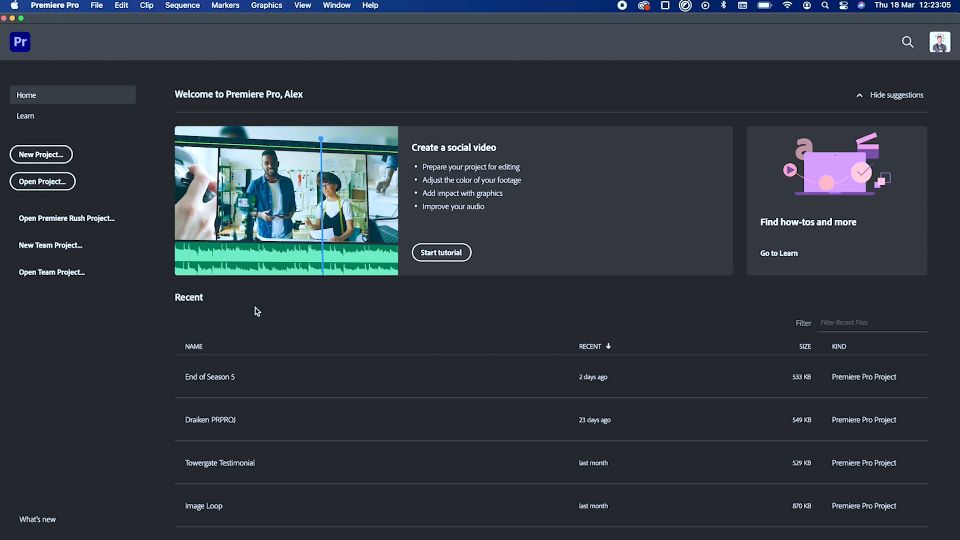 OK, so this will probably be the first screen that you see when you open up, so click on create a new project, save it where you like and give it a nice name.

Don’t worry about any of the other settings on here for now, hit OK and it’s going to open up Premiere Pro for you. 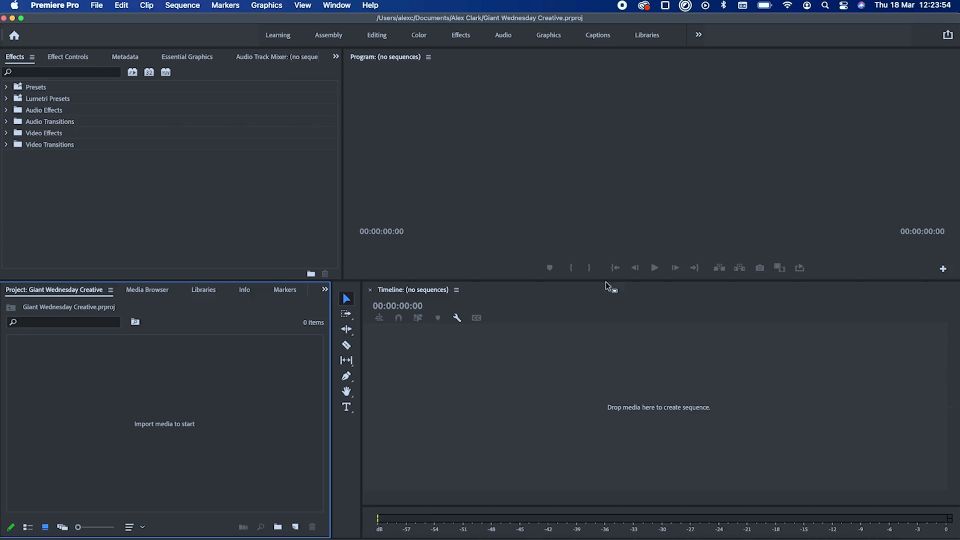 Pretty intimidating, right? It might appear that nothing is obvious, but you’ll soon see that this seemingly chaotic layout all makes sense.

In the bottom left corner, you’ll see your media (or project) folder, so you can begin by clicking on import media, which will open your Finder/Explorer window where you can find files to begin your edit.

Thankfully, Premiere can handle most video and image files, including MP4, MOV, PNG and even GIF files.

What we’re going to show you how to do today, is a couple of videos, one after the other, with a simple transition.

So now we’re going to want to start making our sequence, which is the name of the whole run of the timeline.

So you can create a new sequence by going into your project window and going to File > New > Sequence.

Now don’t be intimidated by the huge list of options – there’s a lot of jargon in here, so if you don’t know the difference between AVCIntra and ProRes RAW – don’t worry, I don’t either! 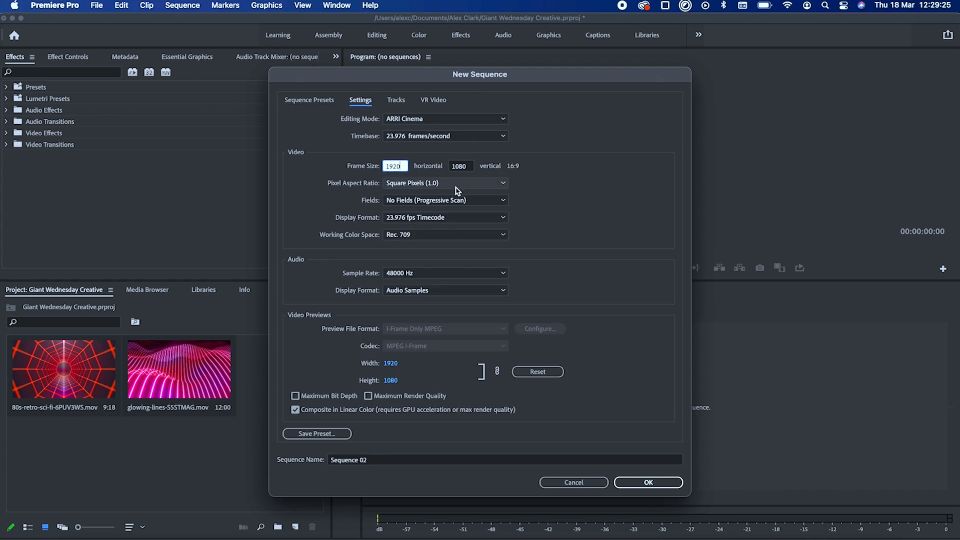 You can create a new sequence preset by going into New Sequence, clicking on ‘settings’ at the top, and then you can actually set the frame size to whatever you like. You can then save that as a preset for a nice and easy blank sequence for your next project!

Alternatively, if the video you’re editing happens to be the same size as what you want your final video to be (i.e. 1920 x 1080) then simply dragging the video into your timeline (that big rectangle box in the bottom right) will create a new sequence with the same dimensions.

You may notice that the box in the top right shows the preview of what frame our timeline is on.

You may also have noticed that dragging the video into your timeline will import the entire video duration to your timeline – what happens if you just want to import part of your video?

In your project window, double click on your video, which will open up your source window in the top left. You can then scrub along your footage, and press I to set your ‘in point’ and O to set your ‘out point’.

You can then click and hold on the icons below the image preview to drag the video only, the audio only, or both by dragging the video thumbnail across.

At the bottom of the timeline, your video channels are shown as V1, V2 and so on, and audio is shown as A1, A2 onwards. – the more videos and audio that are added, the more channels you will have. Whatever video layer is on top will be the one that is visible at the time.

So use the tip of selecting portions of your video to drag about 3 different videos into your timeline, one after the other. 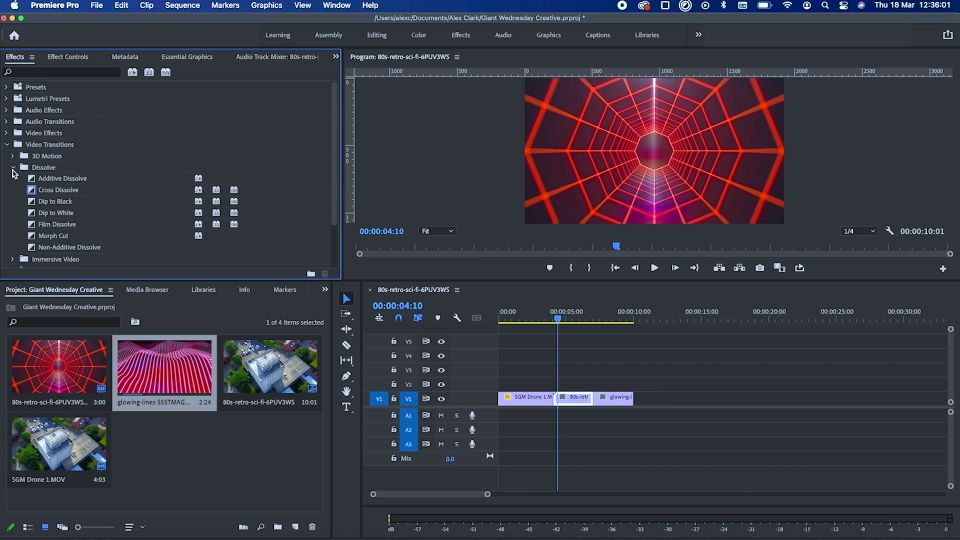 Now we’re going to look at Effects, which you can get to by clicking along the tabs in the top left box. controls of what is in your sequence,

Dip to black where it will fade to black before transitioning to the next one.

So click and drag whatever transition you want to use over into your timeline and hover it over the line between your two videos. When you let go, the effect will be put in place. Give your timeline a play with the space bar and see if it worked!

You can adjust the timing of your transition by clicking on the little box showing the effect in your timeline, and dragging the effect to your desired length.

So now let’s talk about motion. What happens if we want to move a graphic, or a video around our image?

We’re going to put a PNG image with transparency into my timeline and show you how we can give him some animation.

With the graphic in your timeline, you can drag the ends of the video file to make it shorter, or alternatively, you can press ‘C’ on your keyboard to get your cut/razor tool, and then by clicking on the part in your video where you want a cut, the video will be split into two parts.

You can then change back to your normal click selection tool by pressing ‘V’. You can then click on the unwanted part of your video and press backspace to delete it.

Now let’s change the tab in the top left to Effect Controls.

You’ll see the options for position and scale, and by clicking and dragging on the number next to them, you’re going to be able to control the size of your video or image file. 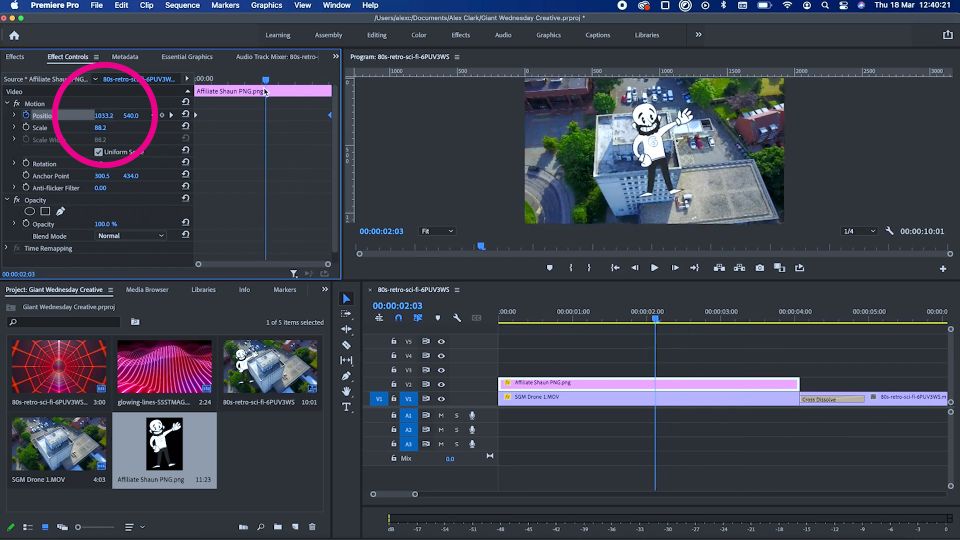 In order to create movement, click on the little stopwatch to the left of ‘position’, which will toggle the animation for that layer. Clicking that stopwatch will create a keyframe which saves that setting of position for that frame in the timeline.

If you scroll to another point in your video, and change the position of your graphic, Premiere Pro will create another keyframe, and then automatically create an animation between your two keyframes.

A tool that we use daily with Premiere Pro is Premiere Composer from Mister Horse. We’re not endorsed by them in any way – it’s simply that good, that we’ll sing praises about it.

You can download it for free, with a few sample animations, but to get the full benefit, we’d recommend buying one of their animation packs for Premiere Composer.

Premiere Composer gives you multiple elements that you can use seamlessly within your Premiere Pro workflow, such as 2d animations, sound effects and transitions. 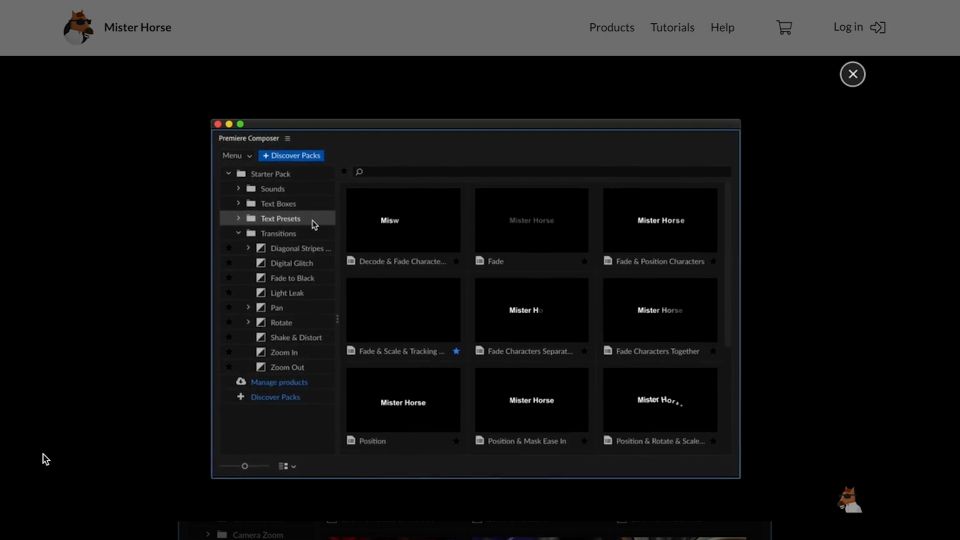 It couldn’t be simpler to use, simply select the element that you want, drag it into your timeline, and you can customise loads of options, such as the length, size and colour to anything you want.

So the next thing we want to talk about is colour.

Drag a video into your timeline, select it, and then change your workspace to ‘colour’ (right at the top of Premiere Pro).

You will then be presented with options to edit the colour of your video file, such as temperature, contrast and brightness. 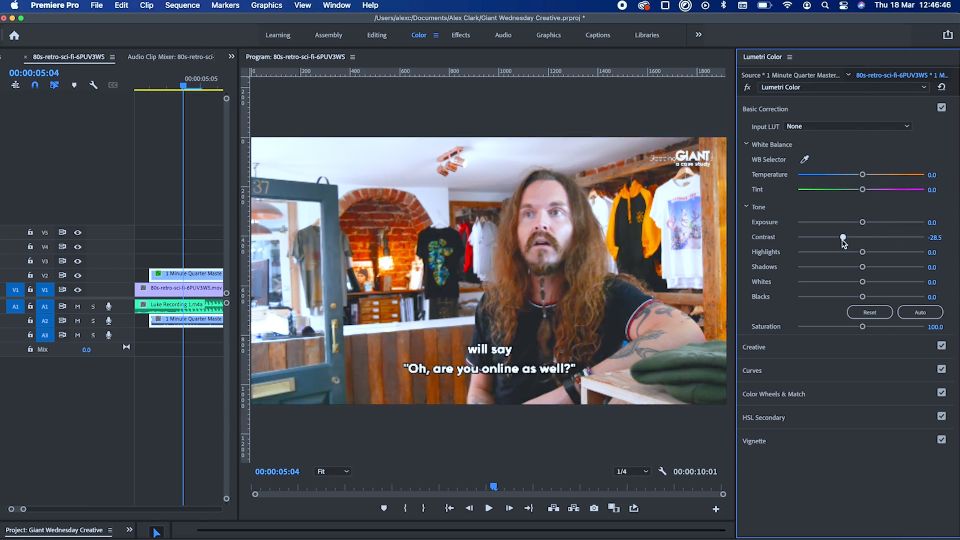 Don’t want to have to edit colour for every single video in a series? Simply go to your project window, select the little ‘New’ icon in the bottom right corner of that window, and select ‘adjustment layer’.

Stretch that adjustment layer across the duration of your timeline and then change the colour of that layer only – everything that sits under that one layer will have its colour adjusted – easy, right!?

So finally, let’s talk about exporting, which isn’t as self-explanatory as you might think.

Go > File followed by > Export, and then > Media, which will capture the entire length of your sequence.

If it isn’t already selected, select H264 from the drop-down menu at the top. That is the format code for MP4 video, which is a very compatible video codec you can use with all major social channels.

By clicking on the file name, you can change where the final video is saved.

Click on ‘render at maximum depth’ in the Video tab, and then use maximum render quality at the bottom.

Thankfully, most of the other settings should be the ones you want by default.

And then click on export, which will render your timeline! 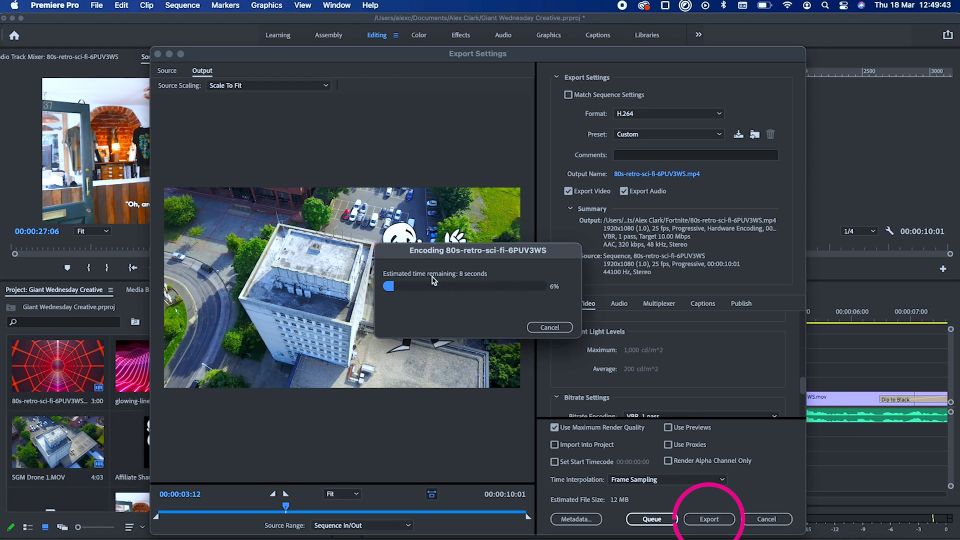 How long will it take? How long is a piece of string? A 15-second timeline should render in about 30 seconds or less, a longer video will take considerably longer.

So that’s a wrap on our basic tips on editing video in Premiere Pro! Was there anything you were hoping we’d cover, and we didn’t? Just let us know and we’ll get back to you.

But for now, thanks for joining us, see you next time for another Giant Wednesday Creative.

Use the form below to sign up and we'll send you fortnightly update emails when a new episode of Giant Wednesday is launched. 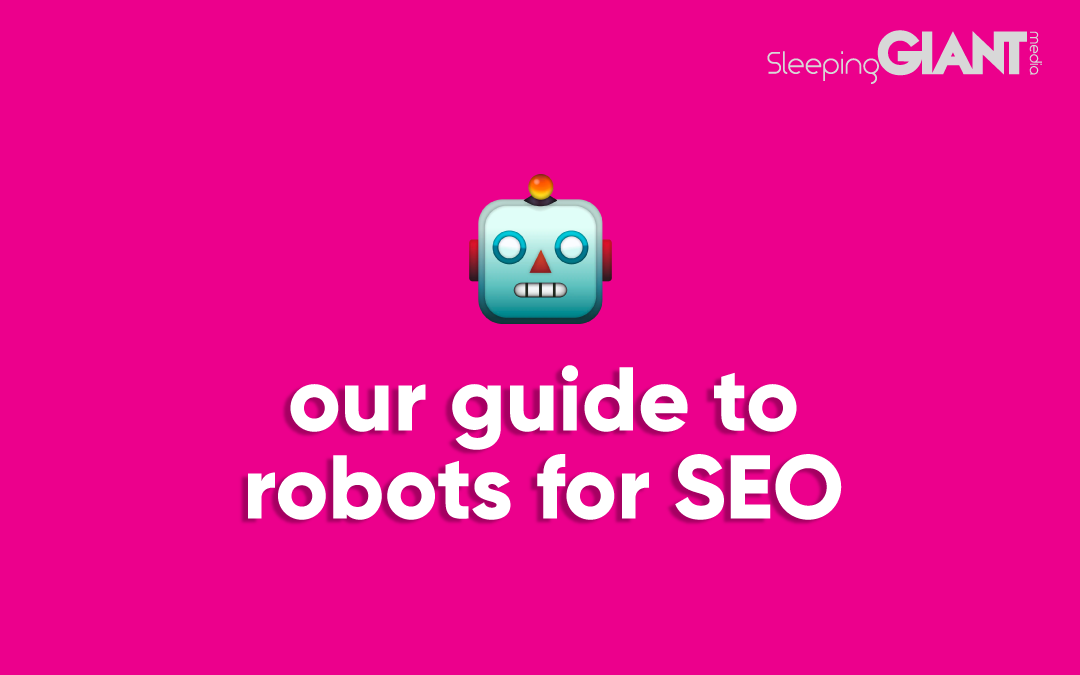 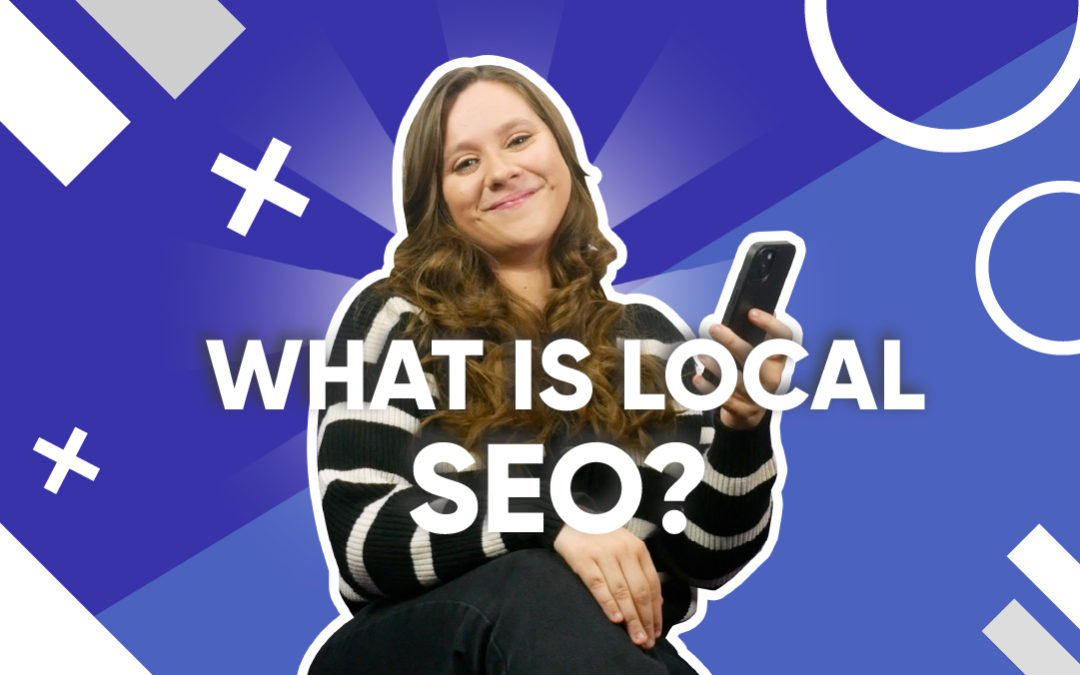