Home > Blog > Should We Be Scared Of Algorithm Updates? 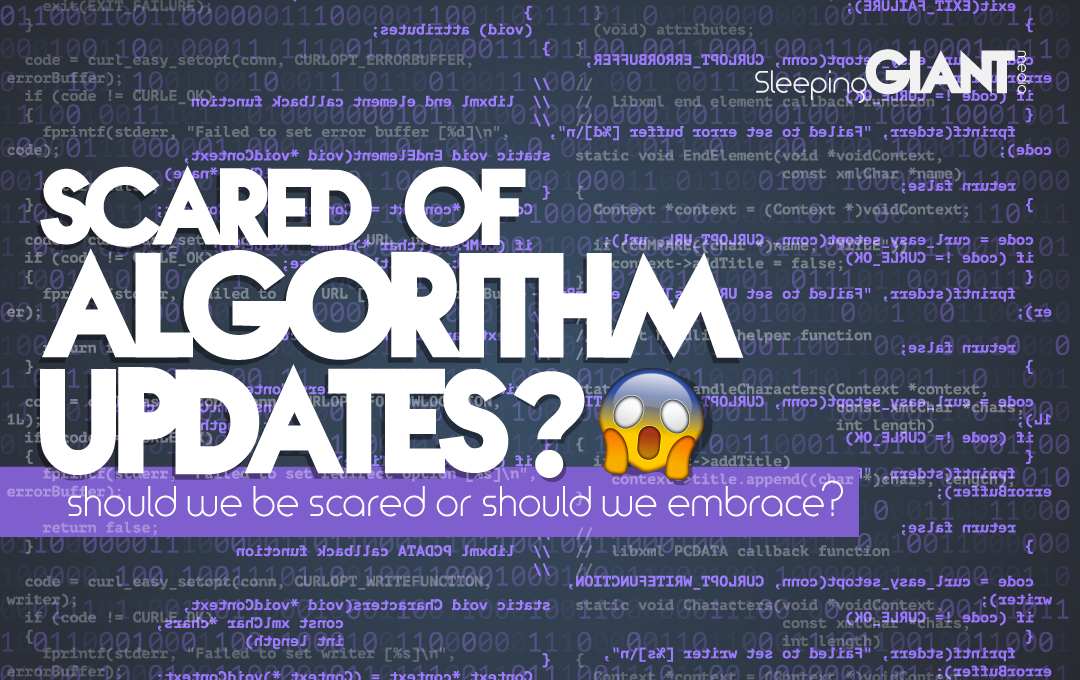 If you work in or around the SEO world, then you will inevitably have heard of the algorithm. Google’s search ranking algorithm is what decides who goes where in the SERPs, and we all know that it’s updated regularly by Google.

When this happens, it often spreads a feeling of dread – mostly because we don’t know exactly what will be in each update. So, should we be scared? Well, that depends on how you do your SEO work.

A history of change

Google’s algorithm has undergone many changes since its debut, helping Google to deal with low-quality sites and the practices they use as and when they come up. As a result, if  you suddenly spot a decline in traffic and rankings that you can’t quite explain, you might’ve been hit by one of these pesky updates.

This doesn’t mean that algorithm updates should fill you with dread, however. In fact, we spoke to a few of the GIANTs about their thoughts on algorithms, and how you can ensure you stay safe.

Our Head of Data, Chris Hirleman, said: “Significant algorithm updates are always something to keep a close eye on. Google works very hard to ensure that changes are beneficial to users, but they do occasionally make mistakes and some of the “good guys” who are focusing on giving users a relevant and valuable experience see a knock. But these updates are usually targeted at sites that are not doing things right – and Google does a lot of split testing and segmenting of the huge amounts of data they have to try and make sure that is the outcome.

You should keep a close eye on your data (especially rankings and traffic) around the release of an update and listen to what the industry says the update covers. Then, if you see a negative impact, you can look to correct.”

As time has gone on, the updates have moved from not gaming the system to becoming quite technical, so it’s wise to keep a close eye on what Google thinks a good user experience is. Mobile load speeds have become super important recently, for example.

One of our account managers, Heather, agrees, saying: “As long as you’re working towards Google’s best practices, which are focused around quality, content and relevance, your sites should generally remain the same – or reap the rewards! It’s the sites that fail to keep up that suffer; for example, Mobilegeddon was a real eye opener for some, along with the recent medic update where the sites that were penalised were low quality and giving users a rubbish experience, either through misleading information or a spammy slow site.”

This does, of course, mean that algorithm updates are an opportunity to improve things, even if you do see a little dip in results. “The premise of updates is very daunting because you simply don’t know how your site will be affected, but ultimately they should be seen as opportunities to make your site better for the user. If you have actionable insights post algorithmic changes, then you will reap the rewards in the long term,” explains Jamie, another of our GIANT account managers.

To fear, or not to fear?

Of course, there are some reasons to be scared – if you’re not playing by the rules. Take it from Sam, bringer of fear and manager of accounts: “Google gives people access to over 160 pages of webmaster guidelines, and each and every algorithm update is put in place with a view to aligning closer to these best practices. This means that if you’re following best practices and doing things by the book, you have nothing to worry about.

If you’re trying to cut corners, use hacks, cheat the system, or find quick fixes – which we all know is tempting at times – then you should probably be scared. Like, really scared.”

So, respect the algorithm, but most importantly, do what makes users happy. That way you’ll automatically keep the algorithm happy (most of the time) too. Isn’t it nice when everyone’s happy? ????‍♀️