In the super fast-paced digital world, things are happening every second of every day. “How can we possibly stay up to date with what’s going on!?” I hear you cry. Well, that’s where we come in. Every Friday, Sleeping Giant Media roundup the biggest and best of the week’s digital news in order to give you everything you need to know. Whether you’re looking for something to read with your beer ‘o’ clock beverage or want facts to flash at your mates over the weekend, we’ve got your back.

This week, we’re talking about the BrewDog backlash on #IWD18, whether print is on its way out, who’d win in a fight between Amazon and Google, and covering Facebook’s first decline in over a decade.

International Women’s Day often sees companies jumping on board, using the occasion to launch special edition campaigns or spin-offs of their products. This year the focus is on BrewDog, who has renamed their Punk IPA as Pink IPA for the next four weeks – in what they call “a sarcastic way to address the gender pay gap and have a dig at “lazy” marketing campaigns”.

As marketers ourselves, I thought why not ask the ladies of Sleeping Giant Media what they think. Laura said, as a marketing campaign, it’s doing a great job. “It caught our attention – good or bad, and that was probably their aim. I think they’re jumping on the bandwagon a bit, but I bet it sells them more beer as people will like the charity aspect. The colour thing is a bit naff, but they are covering their backs by saying ‘its a sarcastic way of addressing’.”

Nell said: “Personally, I like the pink. I know it’s satirical, I know it’s not saying “this is all women should drink”, I know this has been done as a marketing gimmick – but it serves a good cause. Do I feel a little played? Yes. But I think this is 30% BrewDog, 30% my upbringing, and 40% society. Of course, being a woman, my maths might be all wrong there, so you may want to ask a man to check that…”

Check out more on the campaign over on BBC News. To find out our thoughts on the marketing impact of campaigns like this, and how they can make waves on social media, check out the latest blog on Giant Campus.

As NME magazine dies, is print really on its way out?

Today sees the final print edition of NME magazine going to press after a 66-year print run. Parent company Time Inc blame the move on the tough landscape in the print industry and said the focus will now be on investing in “expanding its digital audience” and making the most of online.

This plays into the ongoing discussion around the death of print in our increasingly digital lives. I polled the GIANTs on how they engage with content, and whether or not they believe that the print industry is indeed on its way out. 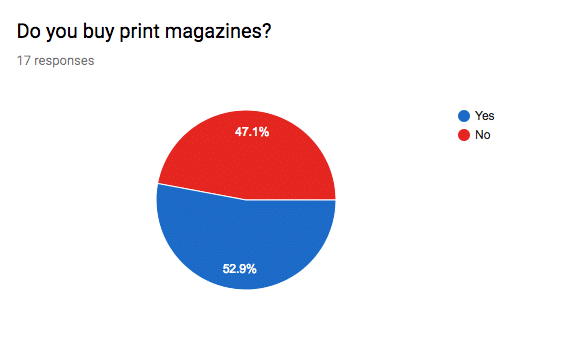 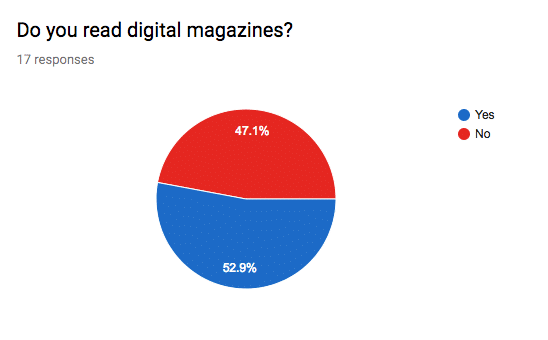 Of the 17 GIANTs I polled, 9 still buy magazines – although that’s a fine lead over the 8 that don’t. However, the same numbers resulted when it came to reading digital magazines. Which poses the question: is it that print’s dead, or is magazine content as a whole dying out? Perhaps we’re just becoming more interested in shopping around for stories or digesting short snappy snippets of info on social media. Find out more about the death of NME at The Drum, and let us know whether or not you still buy magazines in the comments below.

If you’re anything like me, you spend more time finding out what happened at awards ceremonies on Twitter than by watching the actual awards. In fact, social media can offer an interesting insight into whether us humble movie-lovers are aligned with critics when it comes to who wins what.

Turns out that, this year, we weren’t far off. The big winners of the night, both on Twitter and at the ceremony, were Get Out and The Shape of Water. Get Out director Jordan Peele took home the Best Original Screenplay award, while The Shape of Water won Best Picture.

In fact, Peele’s tweet ‘I just won an Oscar. WTF?!?’ was the most retweeted celebrity statement during the ceremony in the UK. When it came to hashtags, research found that #MeToo and #Timesup were the most popular in the run-up to the Oscars and during the night, with 70,282 uses and 35,984 uses respectively across the globe.

This week saw the government launch their Culture is Digital whitepaper, which showed the importance of digital in the world we now live in. With 78% of adults owning a smartphone and 80% using the internet daily or almost daily, it’s easy to see how important tech is becoming to the way we live. Plus, with the creative industries seeing a 45% increase between 2010 – 2016, faster growth than any other sector, there’s a definite shift towards finding new creative ways to get things done.

At Sleeping Giant Media and Giant Campus, we’re big on creativity. From the way we approach our work to the space we call home, creativity plays a big role. Don’t think your work is creative? Check out our blog from Giant Campus Head Boy, Danny Windsor, on how you can think differently about creativity.

We shared this awesome 360° version of the report on our sister company Giant Campus’ Facebook, check it out to get a new perspective on the data.

Amazon uses Nest to take another swipe at Google

You may already be aware of the tit-for-tat battle going on between Google and Amazon, and it’s not over yet. Now, rumours suggest that Amazon is going to stop selling Google’s line of Nest products in it’s latest jab at the search giant.

It’s not the first time the online shopping site has ditched Google-affiliated items from its virtual shelves, with Google Home and Chromecast both being blacklisted to make way for the Amazon Echo and Fire sticks. Perhaps it makes sense then that the Nest smart thermostats are going to be next on the hit list, as Amazon move to win the battle of the smart home gadgets.

I asked self-confessed tech obsessive and lover of all things gadget, Sam Caesar, for his take, as a fan of both Amazon and Google. “The is just the next step in what is an ongoing war, but in this situation, the only losers are the consumers. Where does it end? How far are we from Google finding a way to ban Amazon from the index? Or refusing to let Amazon display ads on Google?” he said. I guess only time will tell. Get the battle breakdown from Business Insider.

Facebook sees a decline in US users for the first time

Facebook is a platform that divides online users. Young people think it’s lost its edge, and have therefore migrated to other platforms like Instagram, and it’s now your Mum’s favourite place to hang out online – which means that young people may be right.

Data released this week found that Facebook usage has dropped in the US for the first time in a decade. The percentage of the US population aged 12 and older using Facebook has dropped 5 percentage points to 62% this year, according to new research by Edison Research and Triton Digital.

If you’re not a Facebook fan then you shouldn’t celebrate just yet – Facebook is still the most used social media platform by a long way. But as other platforms show some serious growth, Facebook may need to start taking action if they want to stay at the top.

At SGM, we find that Facebook still offers the best source of referrals for many of our clients, and indeed for Sleeping Giant Media itself. However, we’re seeing platforms like Instagram and Twitter starting to offer some competition – particularly with engagement. See the full stats on Net Imperative.