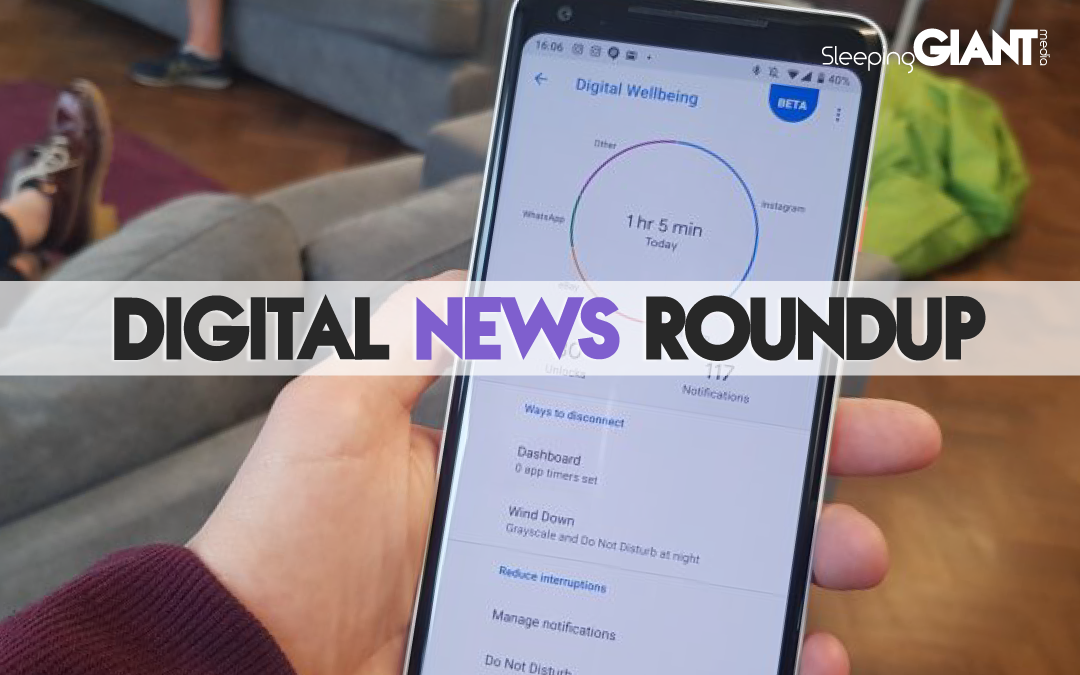 It’s rainy and the weekend is almost here – which means it’s the perfect time to lose yourself in the week’s digital news. This time around we’re talking about Google snubbing flat-earthers, new software that tracks users on social media, the Android Pie update, and how Love Island impacted online users. Don’t skip the end, where we’re talking about the Kent Digital Meetup, too!

Flat-earthers may not be happy at Google’s latest Maps update – as the platform will now transform its maps from the traditional flat view to a 3D interactive globe. The new globe view will turn and change as you move around, and can be accessed by zooming out repeatedly from the current flat map.

One of the reasons behind the change is to more accurately represent land mass on a relative scale, as the search mega brand recently explained over on Twitter. As TechCrunch reported: “Greenland is no longer the size of Africa and all is right with the world.”

With 3D Globe Mode on Google Maps desktop, Greenland’s projection is no longer the size of Africa.

Maps have long created a dilemma for tech companies, forcing them to get into 2D or 3D camps and make a decision. However, Google has now managed to do both – and the company has refused to state specifically why it decided to make the change. Not quite throwing full shade at the flat-earthers just yet, then. Shame. Read more on the story at The Independent. 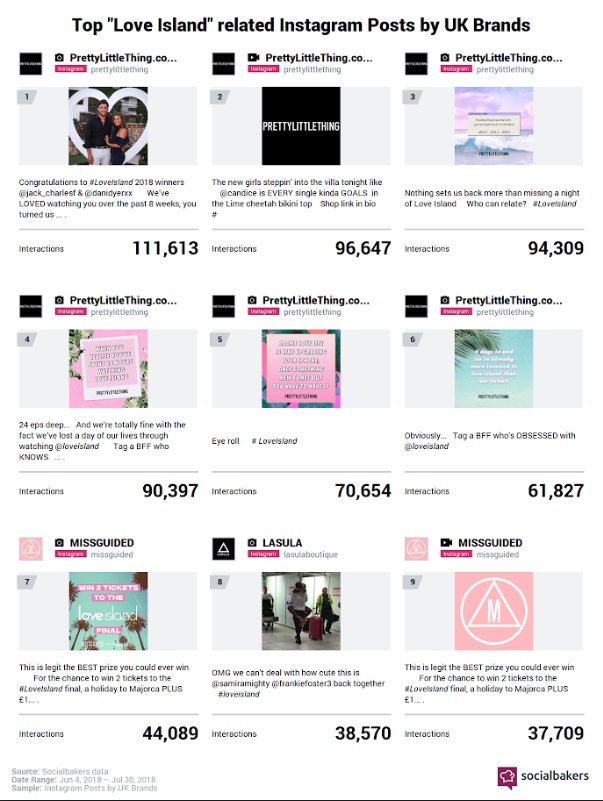 Whether you were Love Island-obsessed or couldn’t wait for it to be over, the reality show that divided the nation sure had a big impact on the digital world – with big brands cashing in on the uproar around the 8-week long show.

This week saw research released on the impact that Love Island had with online audiences, which found that it wasn’t only official sponsors that saw success. For example, Pretty Little Thing came out on top for engagement on Instagram, with over 100,000 interactions on their post about the winning couple – and they weren’t working with ITV in any official capacity. You can also see how they dominated the top 9 related Instagram posts, according to Socialbakers:

Memes were the best form of post on both Twitter and Instagram, with brands like Lucozade (who were an official sponsor) getting a chunk of the retweets thanks to their Love Island memes. It was also interesting to see how brands split their activity across both Instagram and Twitter – highlighting how it’s still really important to tap up your audiences on different platforms with different things to see.

Joining conversations is always easier than starting them, so even if Love Island isn’t your bag, think about how you can learn from some of these brands and jump on board the next big thing when it comes to your social media strategy. Read more at Net Imperative. 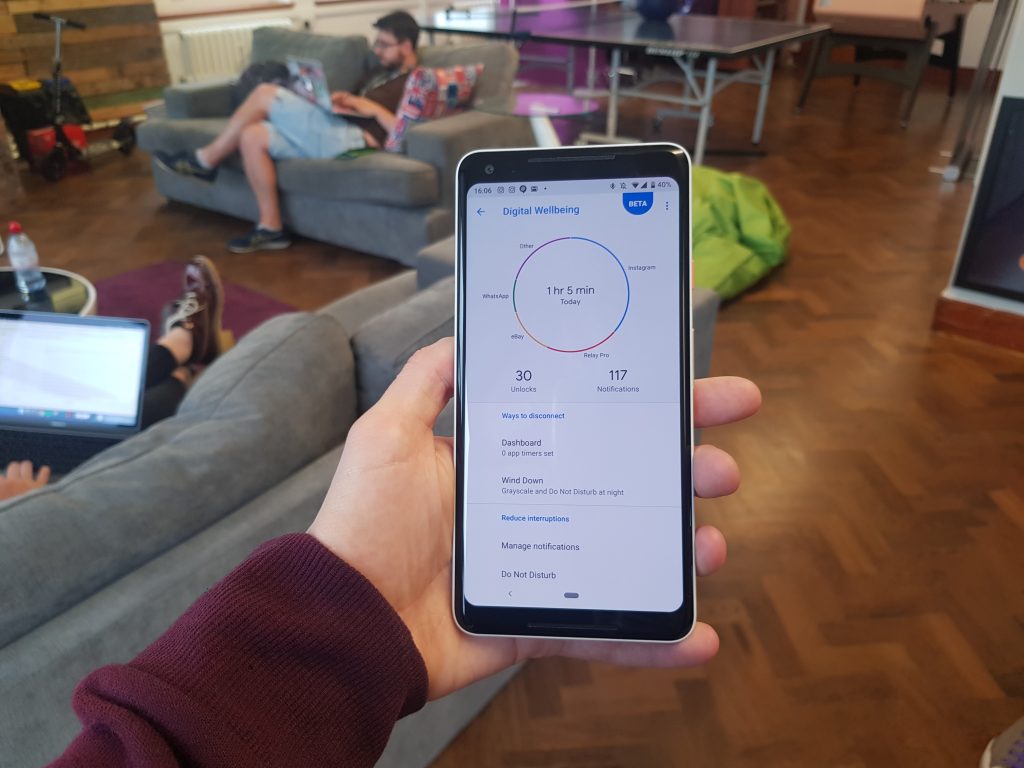 This week saw Google launch the updated version of its operating system for Android users, dubbed Android 9 Pie. Designed to improve smartphone speeds, streamline UX and offer new features, the update comes with a host of new things for users to explore.

Machine learning will play a role in helping you save battery, tailoring performance based on the apps you use most often; you’ll also be able to set different brightness levels in individual apps. Another techy feature comes in the form of ‘App Actions’, which will suggest information based on what it thinks you’re doing – e.g. “when you put in headphones after work, you may see options to call your mom or start your favourite Spotify playlist.”

New gesture controls will help users access an overview screen, containing all apps open at that time, as well as controls that make navigation easy without physical buttons. Digital Wellbeing features tap into the current trend for disconnecting from technology, with usage timers and Wind Down features designed to help you switch off when you need to.

The update will be rolling out to different devices over the next few months, with Google Pixel owners getting it straight away. We spoke to SGM’s resident Pixel owner, Sam, for his first impressions on the update: “I love pie, it’s tasty – most updates are focused on speed and techy stuff like fluidity and frame rates, but this update just goes to solidify why I love Google as a company. They are trying to support people and put relationships in focus with their digital wellbeing initiative, helping us put down the tech and live in the now…inevitably something that we’ll be hearing about from the Apple camp in the coming months…”

Read more on the new features via the Metro.

The system works by automatically locating profiles across different social platforms, like Facebook, Twitter, LinkedIn and Instagram, based on the name and picture associated. Although this can admittedly already be done manually, automating the process makes it faster and more efficient to complete on multiple people at once – designed to help security researchers.  “Performing intelligence gathering online is a time-consuming process,” Trustwave explained in a blog post earlier this week. “What if it could be automated and done on a mass scale with hundreds or thousands of individuals?”

The open-source tool doesn’t require API access, which has been a blocker for tools that have come before it, and collates results in a spreadsheet for easy review. Social Mapper is free software, readily available on GitHub, and is intended to be used in an ethical way – although experts have cited how there are no restrictions on who can use the platform. Read more at The Verge. 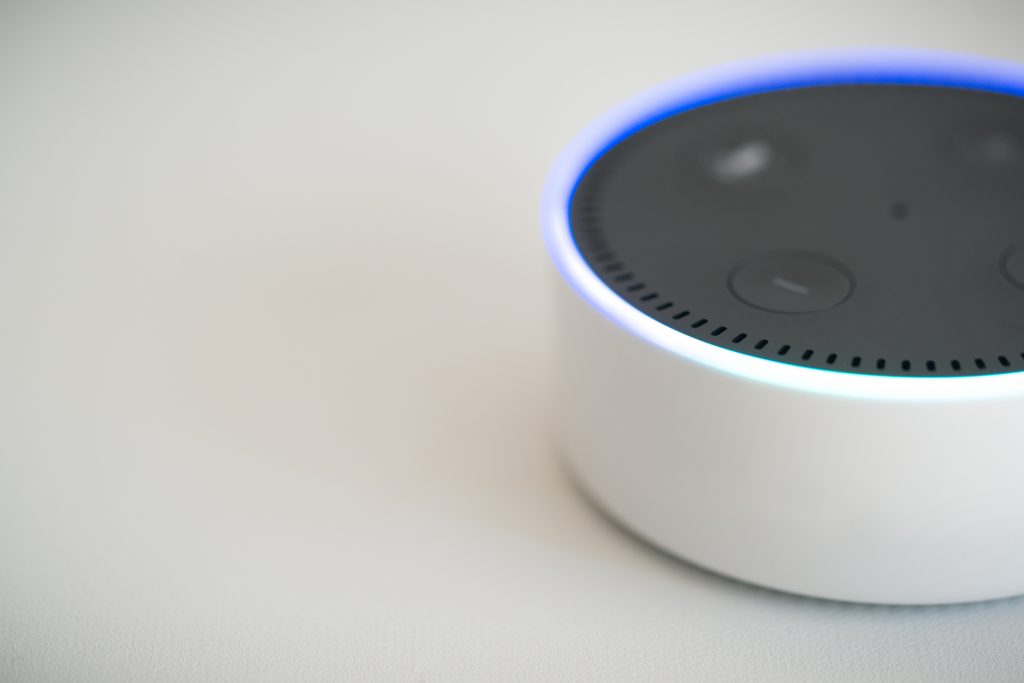 If you’re the proud owner of an Amazon Alexa then you may know that the device definitely doesn’t always have the answer you’re looking for. However, Amazon has now confirmed that these occurrences will become a thing of the past – with Alexa learning the answers to questions and letting you know when it finds them out.

Usually, if you ask Alexa a question and it doesn’t know the answer, you’ll hear something like “I can’t find the answer to the question I heard” and that would be the end of that. Now, if you have Answer Updates enabled, Alexa will send an on-device notification to let you know when it’s learned the answer to a question that you’ve previously asked.

Many think that the move comes as Amazon attempts to strengthen the Alexa system, and fill in the gaps in its underlying knowledge graph – providing a more comprehensive service as more and more people get comfortable using voice-controlled tech in their homes.

To access the feature, or to find out if you currently have the Answer Update feature, just say “Alexa, turn on Answer Update”. All Alexa users should be able to switch on this new opt-in feature within the next week or so, but you can find out more on the news over at The Verge. 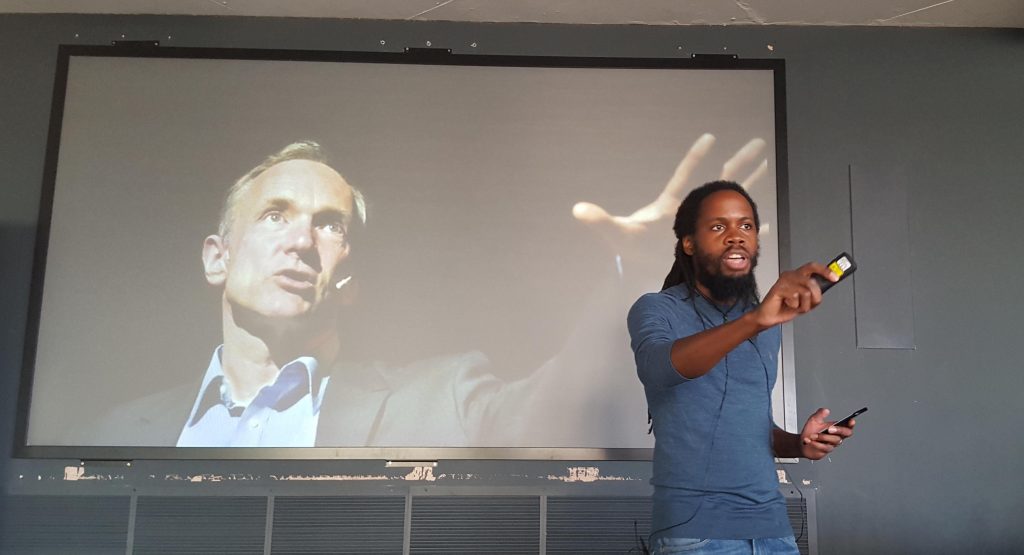 Wednesday saw the latest installment of the Kent Digital Meetup kick off in Canterbury, from its new based at Augustine House in Canterbury Christchurch University. The night saw guests treated to a fantastic talk from Dan Knowlton all about video marketing in 2018, as well as a presentation by Aaron Taylor from Six Two about why the web design industry is broken – and how he suggests we fix it.

Aaron’s talk was not only interesting, but he also did the “god” voice – telling us the story of the internet as an introduction. The talk was very inspirational and gave tons of good points about how we can give our customers the best service possible through our digital presence.

There was, of course, also pizza and drinks, which always goes down well, and a chance to network with all of the awesome Kent businesses in attendance. The new venue also had the most amazing view over Canterbury, which was a definite highlight!

The GIANTs love coming along to the Meetups, and this one was no exception. We spoke to organiser, Luke Frake, on the motivation behind the events: “We started Kent Digital Meetup because we wanted to bring the HUGE digital community in Kent together on a more regular basis. We’ve since expanded from Canterbury to be in Ashford, Folkestone and Maidstone with more and more people coming along every month.”

The next Ashford Meetup will be happening next week, with a Canterbury event following on the 13th September. See you there? Find out more on the events.

If you’re not done reading yet, check out some of our recent blogs. Or, if you are done, see you next Friday. You know the drill. 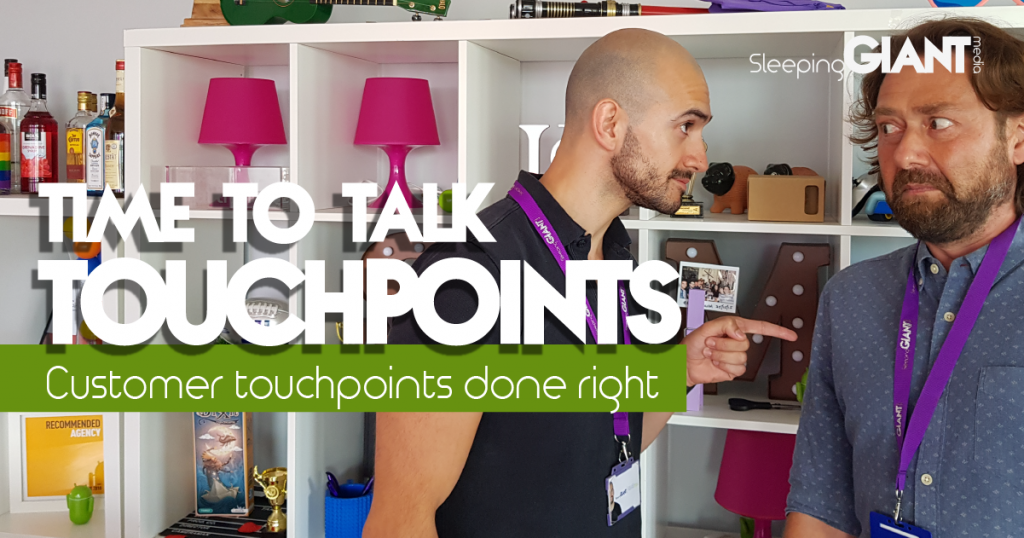 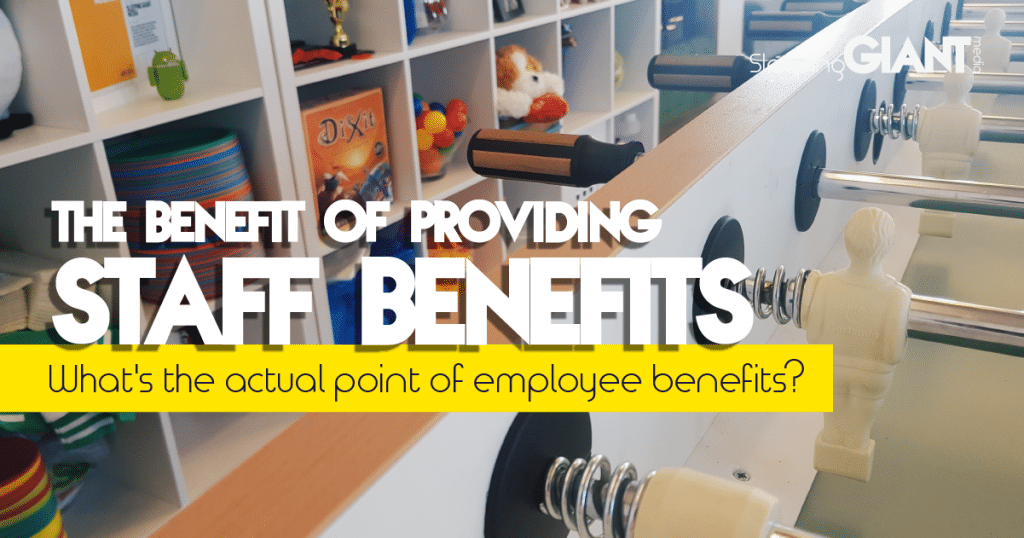