How digital disruption is affecting the World Cup 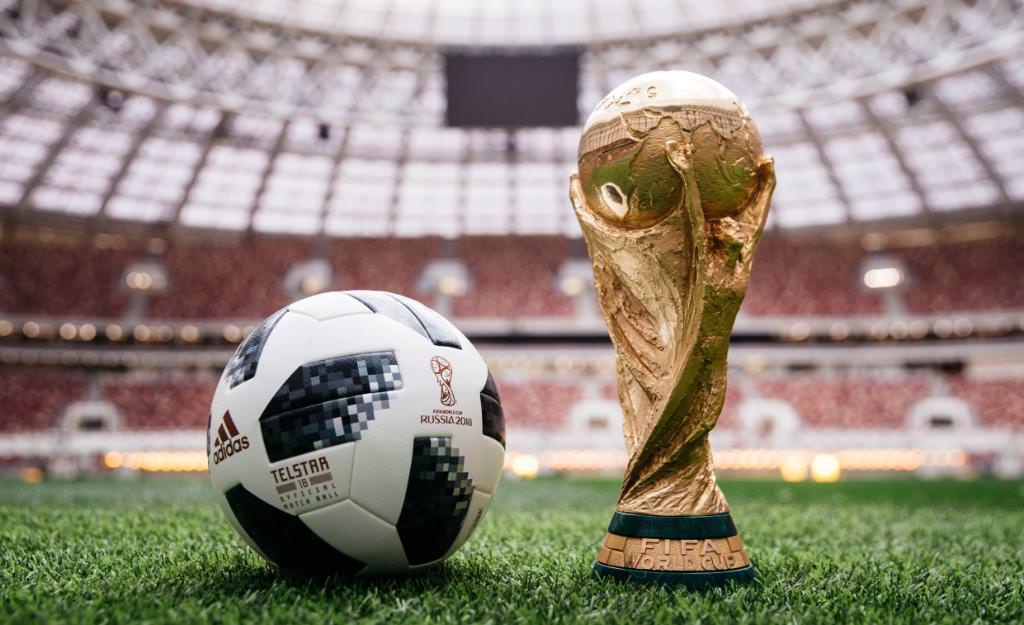 The World Cup is well and truly underway with the first round of games giving us plenty of thrills, spills and surprises. This year’s tournament is expected to be the most watched global event ever, but the way it is being watched is changing, particularly as millennials (those born between 1981 and 1996) make up an increasing majority of its audience.

A major shift in viewing habits

Watching live matches will be just a fraction of millennials’ engagement with this World Cup. They will also talk about games with friends on social media, bet online and catch up with highlights on YouTube, as well as liking videos made by friends who are in a stadium in Russia or some lively bar. With smartphones in hand, people will be constantly plugged into the stream of football content that will be coming out.

The increase in the number of outlets giving World Cup information means that while many millennials will tune into their national television broadcasters to watch matches, they will skip the long punditry shows before and after games, considered by many to be an old format, for old people. Instead, they will turn to dedicated World Cup podcasts, which they can listen to while doing other things, or online fan channels for particular teams or players. No longer do fans have to wait for club websites and sports channels to give updates on their team, a quick look at a player’s Instagram profile will give you an immediate, direct update on their injury with plenty of videos and photos, way before it is billed as ‘breaking news’ on Sky Sports. 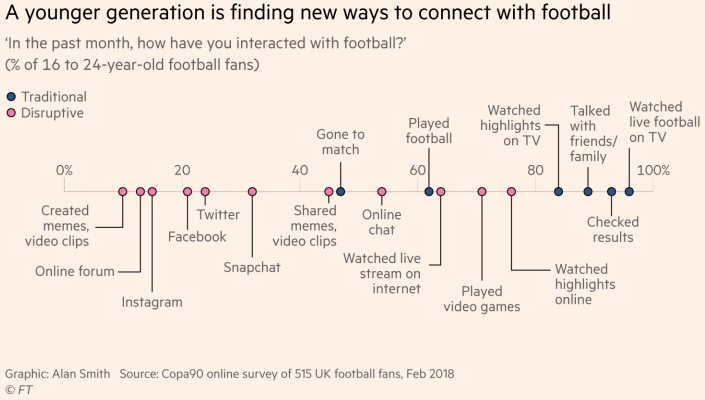 Television but not as you know it

The cumulative global television audience for this summer’s tournament will be 10.8 billion, according to Futures Sport, a data agency. This is 14 per cent more than the 2014 World Cup in Brazil, partly helped by the fact that kick-off times in Russia will be more convenient to European and Asian audiences. However, one thing these estimates don’t include is online streaming, an increasingly common way to watch matches as viewing quality on smartphones and tablets has improved. According to a report by the consultancy LSU and digital agency e3, 58 per cent of those under 30 admit to illegal streaming of games.

Traditional broadcasters have been hardest hit by these changes. Viewing of Sky Sports channels in the UK dropped 14 per cent in the 2016/17 season, and two weeks ago, after a poor initial auction of the Premier League’s television rights, Amazon stepped in and paid to screen 60 matches in Britain over three seasons. Similar trends can be seen across the board, with young Britons now watching more Netflix than all forms of BBC television combined. 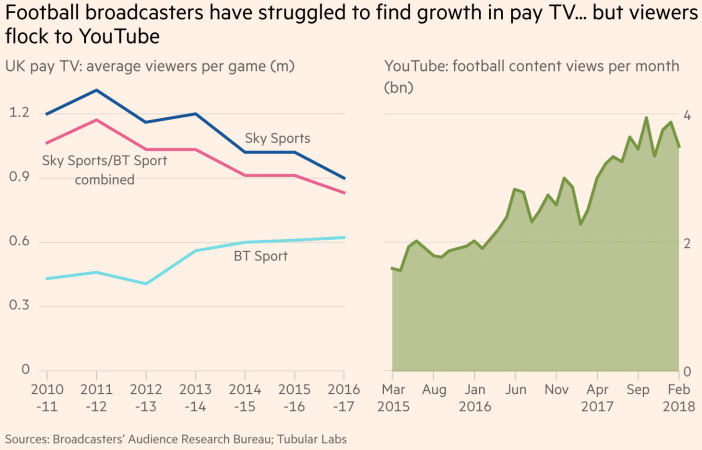 Sky and other similar broadcasters are aiming to tackle this conundrum by providing alternative ways of watching matches, like offering day passes to watch games, rather than paying a monthly or annual fee which is less and less likely to happen with millennials. For the first time, all BBC World Cup games can be watched in virtual reality, while three million people watched England’s first game against Tunisia on BBC iPlayer.

According to video analytics company Tubular Labs, football videos on Instagram attracted 2.9 billion views in the third quarter of 2017, up 917 per cent in two years. Furthermore, a third of millennials use social media to watch sport and over half of all fans will use social media while watching World Cup matches, say Global Web Index, a consumer data company.

The 2014 tournament generated more than 2 billion interactions (likes, comments or shares) from 350 million Facebook users, according to the social media giant. This was the largest thing ever measured in terms of the number of people talking about one single event. These figures are set to grow substantially at this World Cup, considering that the number of Facebook users has increased by over 60 per cent in the last four years. 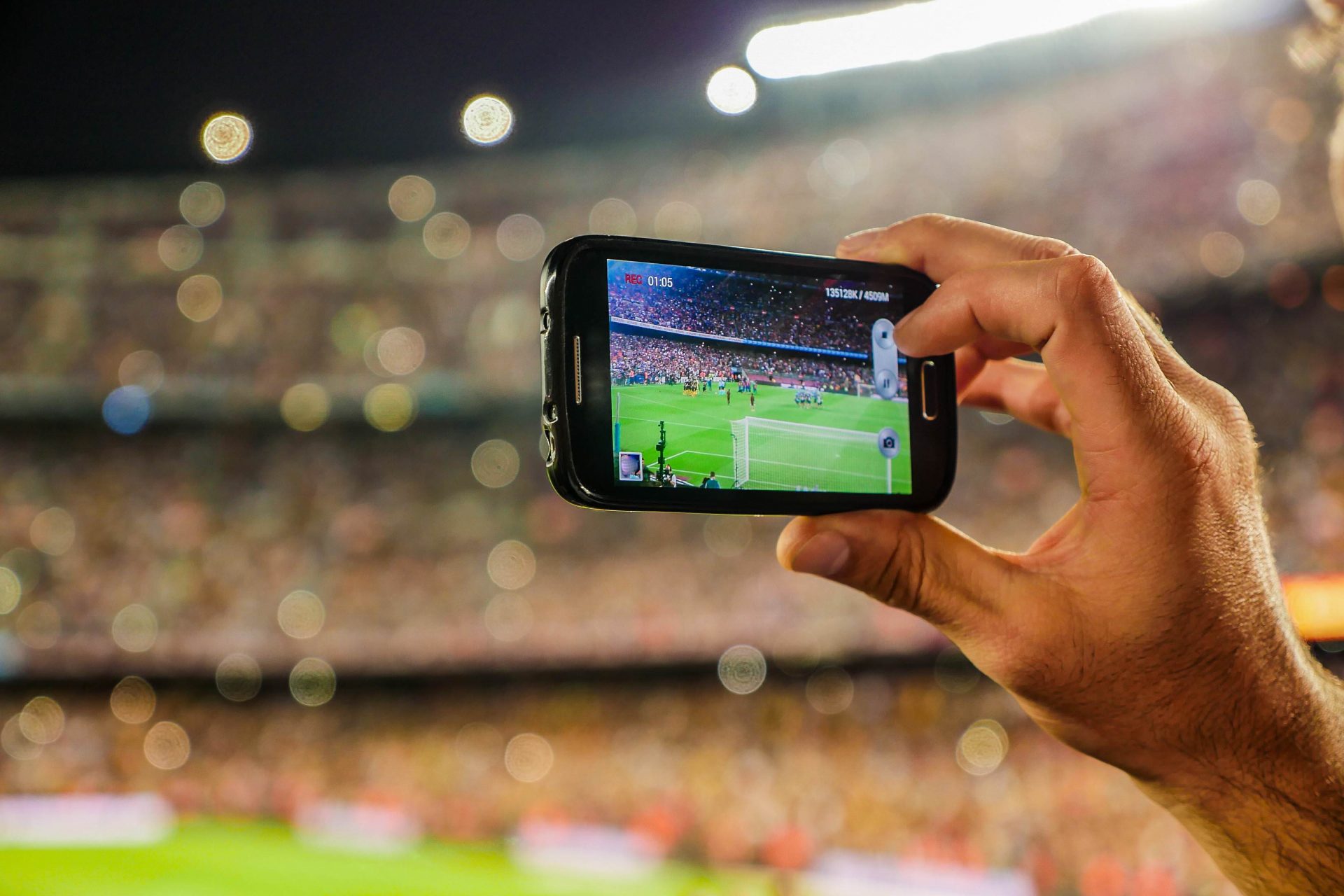 This World Cup will offer new opportunities to national teams and players. Facebook has even advised the English, Spanish and Portuguese football associations on how to approach this year’s tournament. Making recommendations on how to use the platform, such as letting followers see ‘behind the scenes’ videos at training and hotel complexes. Many players already do this themselves. England’s John Stones used Facebook Live to connect with his Manchester City teammate Leroy Sané in Germany’s camp before England’s friendly against the Germans.

Players have become so good at promoting their own brand that they needn’t even be attending the tournament. French striker Karim Benzema, who missed Euro 2016 through suspension, attracted the third-most views on Facebook, YouTube and Instagram during the event, according to Tubular Labs.

So wherever you watch the next World Cup game, let’s hope another piece of new technology – Video Assistant Referee (VAR) – doesn’t disrupt your viewing experience!

Being social media savvy like our giants is vital to tap into the burgeoning millennial market, so if you need any help with your social media and content strategy please do not hesitate to contact our expert team. If you’d like to understand how to do it for yourself, then check out Giant Campus and their digital marketing training courses.