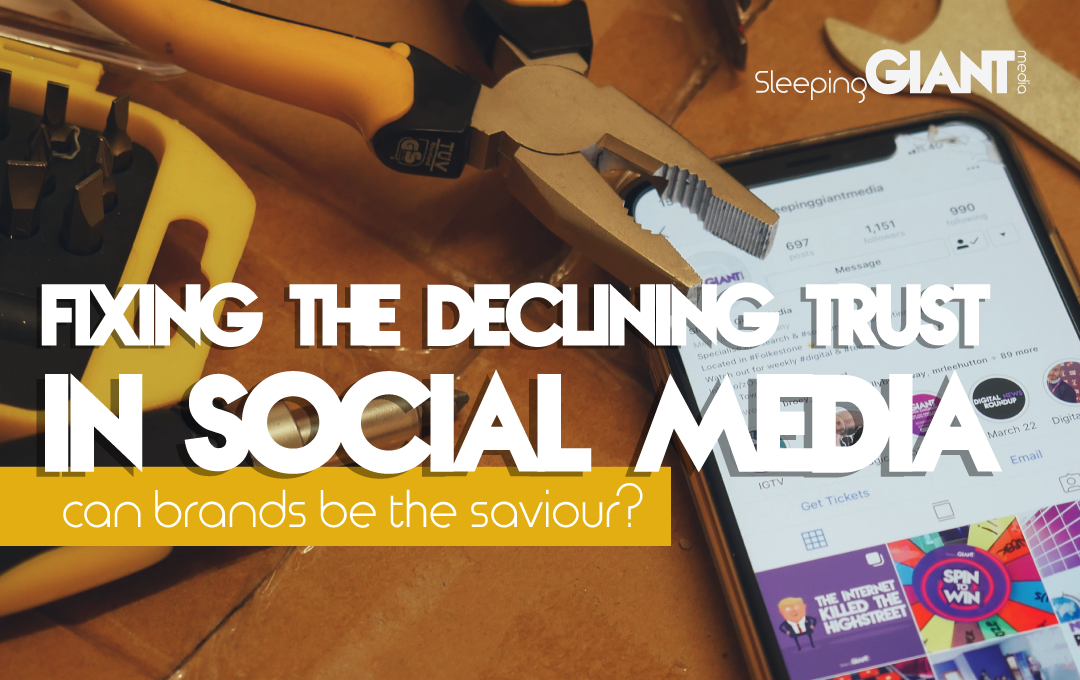 For many brands, their social media presence is about getting in front of their audience, building familiarity, and fostering trust. Well, and making sales, but let’s not focus on that one right now.

Unfortunately, it’s often not quite working out like that. Consumer trust surveys are pointing out the fact that consumers trust social media less and less, which is, unfortunately, affecting the brands that use these platforms as a result.

When we turn to the stats, one study found that trust in social media has dropped 11 points in the United States during 2018, also falling 4 and 2 points in Germany and the UK. Across the globe, only 41% of people say that they trust social media platforms, while 40% of people said that they deleted one of their social media accounts in 2017 because “they didn’t trust the platform with their personal information”. In summary – the numbers do not look good.

Where did all the trust go?

When it comes to this distrust, there are a few reasons that seem to surface on a fairly regular basis. Many social media platforms have faced backlash in recent years when it comes to dealing with issues like trolls, fake accounts, hate speech and fake news. There have also been many noticeable issues around the ways that users’ personal data is handled – did someone say Cambridge Analytica?

Unfortunately for brands, the social scrutiny doesn’t fall solely at the feet of the platforms themselves. People also expect brands to do something about the issue, with 70% of respondents to one survey saying that “brands need to pressure social media sites to do more about fake news and false information”, while 71% expect brands to put pressure on social media platforms when it comes to protecting personal data.

When it comes to the negative perceptions created on social media, not all of them are accurate. 48% of people blame a brand if one of their ads appears near hate speech, or violent or inappropriate content, with another 47% believing that “content found on the same page as an advertisement reflects the advertiser’s values and views”. So, even if your ad is perfect, if it appears near something hateful, you’re in trouble. Eek.

When Edelman made a statement about their latest trust study, the company explained: “Consumers expect brands to have values, not just a value proposition. That means consumers are looking for brands to act to improve social media because the power of the advertiser exceeds that of the individual.”

So, what can brands do to build that trust back up? Let’s start by saying that it’s probably not going to be easy. But with things like GDPR coming into play, many companies have had to change their data collection policies and procedures to put the user back at the forefront, which can only be a good thing.

Either way, it’s becoming more and more important to be transparent around things like data collection if you want to get in your audience’s good books. With so much choice out there, no matter what the sector, consumers are going to place their trust behind companies that they believe have their best interests at heart.

When it comes to the content you share, make it real. Focus on content that shows your unique expertise, and positions you as an authority in your industry. After all, we’re all way more likely to trust someone who knows what they’re talking about. Make content that talks about what you actually believe in, use real people from your business where you can, and make it true to your company ethos.

People can smell a fake from a mile away – even through a computer screen.