Home > Blog > Social Media Predictions For 2020 From The Experts 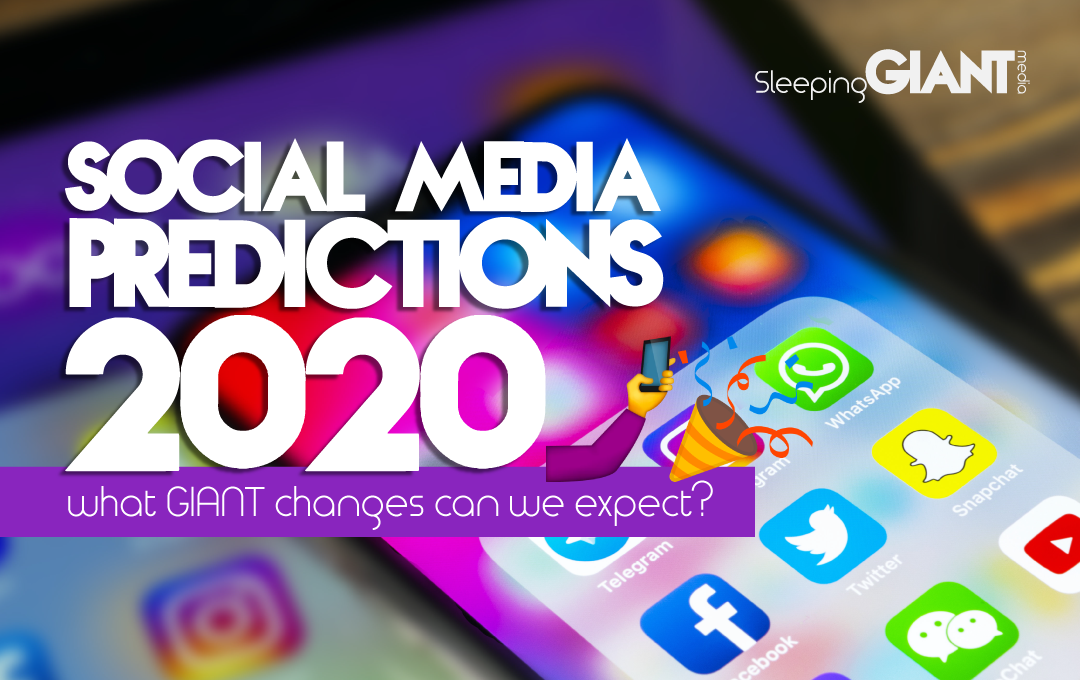 Rarely does a year go by without the world of social media experiencing seismic changes, and 2019 was no exception. From the rise in Tik Tok, to the prevalence of privacy – there have plenty of newsworthy updates hitting all the major platforms. But what’s to come in 2020?

Yearly prediction lists are about as predictable as they come, but bear with us – we will try to make this one at least a little fun. Or a lot fun. We’re pretty fun.

With the American political race coming to a head next year, many eyes will be on Facebook and its decisions regarding running political ads in 2020. It has already made steps to more clearly identify these ads, but with mounting pressure and Twitter’s move to remove political ads entirely, there is a chance that Facebook will follow suit.

But how likely is it? Facebook has made efforts to label political ads and removed targeting options for these ads. But, ultimately, they make a ton of money from them – and due to the huge number each year that could be labelled as political, it’s unlikely that they will be banned completely. Instead, it is more likely that we will see a continuation of this focus of tightening rules on specialist ads, and a continued effort to roll out regulations to govern it.

2. Augmented reality will continue to be a focus

Instagram, Snapchat and Tik Tok have all demonstrated that augmented reality can be an enormous hit with massive audiences around the world. Similarly, FaceApp achieved notoriety in 2019 with its de-ageing filter – now having been downloaded by over 80 million people. In 2020, we expect to see many more similar apps – along with new AR developments for the major platforms like Instagram and Snapchat.

With the increase in users at an exceedingly rapid rate, alongside increased advertising options on the platform, it is incredibly likely that we will continue to see growth in marketing attention paid to Tik Tok. Whether this platform will have the staying power of some of the older platforms, or whether its bubble will burst, is hard to say, but at the moment, the momentum doesn’t seem to be slowing down.

4. Social listening will be even more important

With activity across the digital landscape taking place over an increasing variety of platforms, it is likely that social listening tools will play an even more important role in marketing in 2020. Monitoring brand sentiment, campaign response and rising trends are more challenging in the diverse landscape, but tools that help bridge those gaps will likely be even more in demand.

5. Likes and other metrics will disappear

Instagram has already made moves to ditch likes, but there is a high chance that other platforms will also follow suit next year. Instagram has claimed that this move is to remove the need for validation, which can be detrimental to mental health; however, others have rejected this reasoning. Though the conversation regarding this may be ongoing – with Twitter and Facebook both making comments regarding the removal of likes on their platforms – it is likely we will see more widespread changes in this area over 2020.

What are your predictions?

These are just a few of our predictions for next year, although if the last year is anything to go by there will be a whole host of things that seem to come completely out of nowhere. But that’s just the fun of digital, right? Let us know your predictions by dropping us a comment on all the usual social media platforms – we’d love to hear what you think.