An Apple a Day Keeps The Doctor Away?

Today marks National Eat A Red Apple Day! As the old adage goes,  “an apple a day keeps the doctor away”; But, to what extent is this true?

Hands up who’s ever convinced themselves (thanks to Google) that their 4 hour headache means they’re slowly dying? Or that faint twinge in your tummy is somehow cancerous? I can raise my hand to both of those…

In what is now dubbed as ‘Cyberchondria’, people are increasingly using the internet to self-diagnose illnesses.  Figures show that more than 50% of patients have talked with a Doctor about what they have researched online, and a further 1 in 3 people use their mobile phone to self-diagnose their various ailments.

Those who are most likely to be Cyberchondriacs include: Women (more than men); People from households with incomes of more than £50,000; Younger people; People with University degrees or higher

It is also stated that from the medical information found online, 46% of users were led to seek medical attention from a professional, 38% said it was something they could take care of at home, and 11% said it was both or in between. 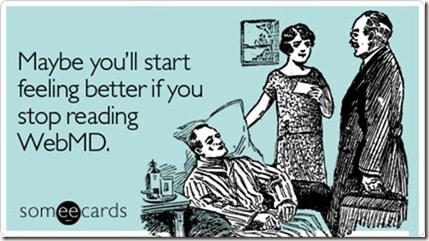 The rise of Cyberchondria, however, has arguably opened up, and widened, GP and patient communication: with patients approaching their GPs with their personal research, it is argued that this proves valuable in extracting more detailed information from the patient about their current condition. However, Doctors have shown concern over patients who self-diagnose from information they have found online where the patient may show inaccurate beliefs of diagnostic and medical possibilities. This can therefore impair the Doctor’s ability to reach a correct diagnosis.

So, while Googling your symptoms on your laptop whilst in bed seems the most convenient solution (and the less arduous one at that!), it isn’t necessarily the safest: Firstly, many serious and life-threatening conditions have very common symptoms – only a trained medical practitioner can diagnose your condition properly; Secondly, after self-diagnosing, some may be convinced by their research that nothing is wrong, so they may never visit a Doctor; And thirdly, some medical sites and sources cannot be fully trusted and therefore there’s no guarantee that the information is accurate.

Although being a Cyberchondriac arguably cuts out any embarrassment about conditions, ultimately, an apple a day does not keep the Doctor away – keep on eating those Braeburns!