Google+ is here and Google are doing loads to try and get us all using it. Some bits we can see, some bits we can’t, but none the less there is a pretty comprehensive strategy behind it all.

This isn’t an easy thing to do in such a competitive space, so how are they going to do it? Well, this is my view on how I think they are going to try and dominate the market, and turn Google+ into the social network of choice within the next five years.

Search engine marketing is big business for companies selling products online. Some of them invest significant amounts into SEO, some do everything they can to climb that one position higher. The reason? That one position could equate to big increases in traffic, customers and revenue. Google obviously know this as they created and control this market. It just so happens that being active on Google+ has quite big impacts on the SEO positions. Strange that isn’t it.
Anyway, as a result that means that more and more companies are doing more and more on Google+. They are putting offers, content, information and much more on there that is valuable to their customers. This in the long run will help encourage more customers to go to Google+ to find these offers. Here is a recent algorithm weighting chart from Search Metrics illustrating the point very nicely. 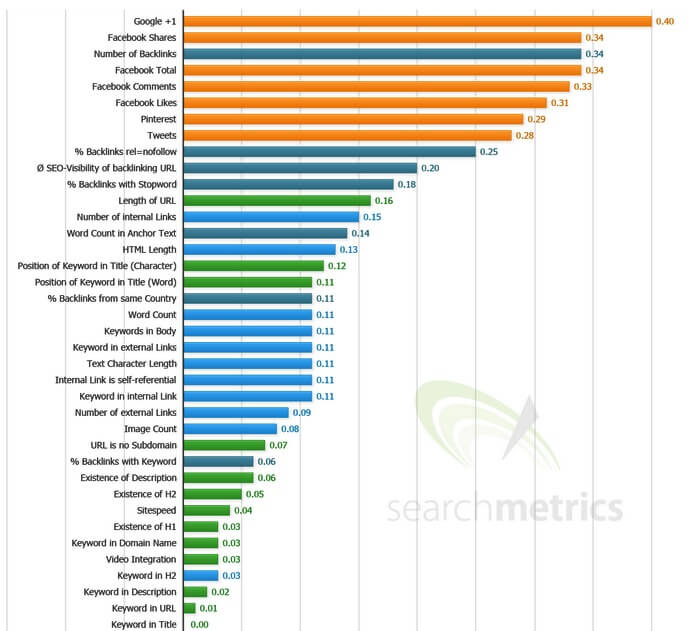 You can’t deny it, it is great. The interface, app and capabilities of Google+ are great. They work well and are generally pretty intuitive. Events are great, and in my opinion miles ahead of Facebook’s version. Hangouts are amazing. If you haven’t hung out… well, get involved. This is the most intuitive and functional conferencing facility I have seen to date. Communities are also coming along nicely, providing great ways to engage with like-minded people. I think Google+ is the only real social network that understands the concept of a local global community. This will be the way of the future, and as the social media networks become saturated it will be the ability to connect with similar people that will be imperative for user experience and also advertisers.

Google’s development team are up there with the best of the best. They are constantly creating new offerings, products, software, and so on. Since the launch of Google+, the interface and functionality has changed dramatically. They are constantly thinking of new additions.

The other social networks on the other hand haven’t really changed too much. Admittedly, Facebook has changed to a timeline view, but I still have issues finding my way around the layout and interface, which I think is overcrowded and unclear. The mobile version of Facebook, however, has taken a big step forward.

Facebook ads cloud the interface. Google+ at the moment doesn’t have any advertising cluttering up the interface. The appearance of the adverts in Facebook is generally based on advertisers selecting a number of different criteria in order to show their ads to the most relevant demographic, latterly we have seen them join with other tracking solutions to allow retargeting to take place via Facebook ads. Although this is reasonably targeted, most people are not on Facebook to buy things. They are there to look at baby pictures, wedding pictures, or the annoying holiday snaps that are clearly posted to make you feel jealous.

Will we see advertising within Google+ at some point? Yes. In fact, they are already trialling +Post, which allows brands to have their Google+ content shared around the Google display network. Eventually, this will be a really powerful platform for advertisers. Google will be able to add a number of targeting features to allow advertisers to advertise, promote or sponsor posts or ads I am sure. The great thing for us agencies or advertisers is that they already have the best advertising interface on the market, AdWords. It isn’t a huge leap to see them adding in features to allow people to use this interface they already know in order to get people using it to advertise or promote via Google+.

The other platforms all have their own advertising interfaces, but they are nowhere near as good. Google have produced a great platform that is easy to use in AdWords so have all the backend capabilities in place to quickly monetise it once they reach a critical mass of users. They also have hundreds of thousands of people who are already using AdWords, so if by some strange twist of fate they haven’t come across Google+ from other sources, as soon as these new features are added to AdWords they will lead the users back to Google+.

Most social networks, broadly speaking, fall into either B2B or B2C. Facebook, for example, is very much B2C, LinkedIn is B2B and Twitter, although more in the middle probably is most effective in the B2B sector. I don’t think Google+ makes this distinction. This is a really important feature as the nature of the workplace evolves. We are seeing more and more about “flexi time”, working from home, hot design, etc. all of which are designed to help work become more of a lifestyle than a formal function. Ties, suits, etc. are a thing of the past in most offices these days. Google+ is LinkedIn without the tie, and Facebook with a desk! The features can work with B2B and B2C solutions. As a result, their market is bigger, their reach further and their impact significant.

Facebook owns Facebook, Twitter owns Twitter, Google owns everything! What I mean is that Google was a search engine and money making machine first. It has moved into social as a phase two. This means that Google has the ability to integrate with the the buying cycle. Their ability to show +1s on the search engine results page is really powerful, and mirrors the natural everyday conversation we have with friends when researching a new purchase. Google+ combined with Google’s SERPs brings this online.

Google Places was a nice feature wasn’t it? Hey, where did that go? Well, that has now migrated to Google+, so by default every business now has a Google+ page. I would also take a guess that the more active you are on your Places/Google+ page the better chance you have of ranking higher up in the map section of Google’s universal search.

From a consumer perspective, Gmail nicely integrates with Google+ and any email from anyone who has a Google account now lets you add them to a Circle directly from that interface. Again, this is another platform on which Google have a huge customer base.

Google have this covered from every angle I can think of.

One question I am wondering is if they will go as far as phasing YouTube into Google+ so that you upload content via Google+ as the primary step. I can’t answer this one yet, I am interested to see what they do with YouTube and Google+ in the long term. Watch this space.

Google+ is still mainly used by techies and bloggers, in marketing parlance the “innovators” on the adoption curve. You know what comes next… everyone else!

If you would like to know more about how Google+ can be used within your business please get in contact.