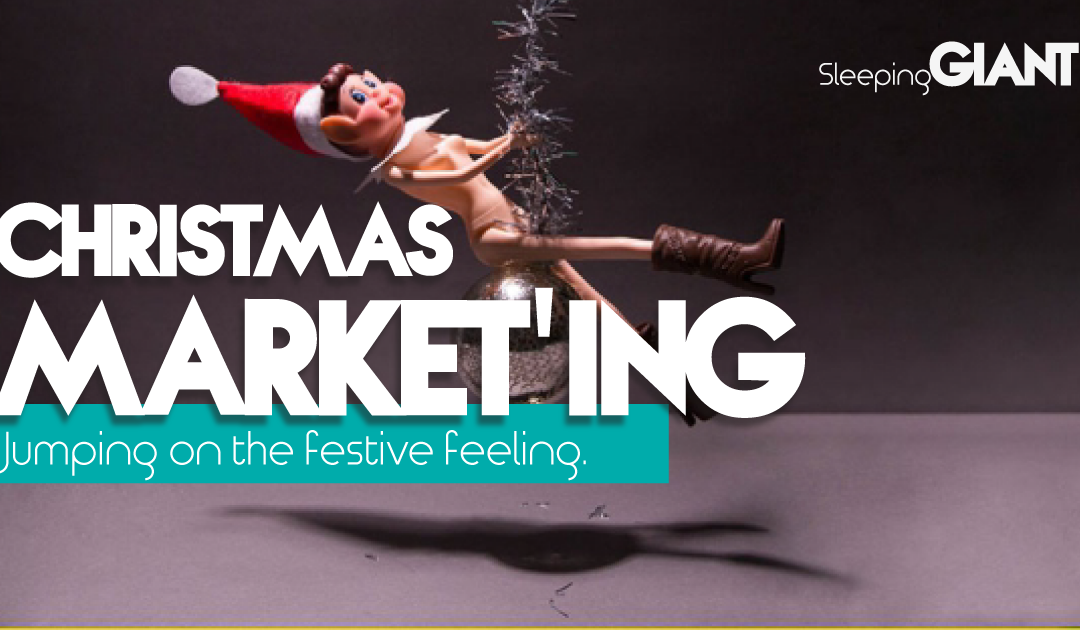 Christmas Day is almost here. Now is the time of year where businesses are either winding down for a much-needed break or ramping up for one of the busiest periods of the year.

When it comes to marketing, the festive period is one of the most highly contested, and potentially most rewarding, times to advertise your business. Switch on your TV, tune into your radio or click onto YouTube and you too will be inundated with adverts celebrating festive cheer and stellar discounts.

Grab yourself an eggnog, maybe a mince pie and sit back and relax. Over the next 3 minutes, we are going to look at some of the more creative ways that businesses have managed to integrate Christmas into their marketing strategy. 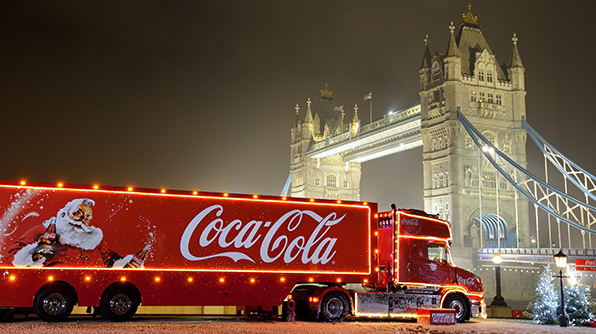 Getting attention during the competitive Christmas period is great, but gaining worldwide notoriety is even better.

For years, Coca-Cola and their distinctive trucks have been synonymous with Christmas. How did they do it? By being large, loud, and unique with their marketing strategy.

For many businesses, the boardroom meeting where someone pitched the idea of travelling 730,000 miles (29 times around the world), delivering hundreds of thousands of soft drinks over the course of seven years, would likely result in them ending up at the top of the company’s naughty list. For Coca-Cola, it ended up as marketing gold.

Though this may be hard to replicate for smaller businesses, the prospect of using a generous gesture – be it giving products away, or giving money to charity – is something we see time and time again, and can lead to a substantial PR boost, as well as a warmer heart leading into 2018.

The highly contested Christmas Ad of the Year

Forget the radio charts, the real blood is shed over who comes out with the coveted Christmas advert of the year. Will it be Marks & Spencers? Will it be John Lewis? Will Sainsbury’s come out of nowhere to deliver a nostalgic, World War set tear-jerker that blows the others away. Only time will tell.

Don’t be fooled by the deceptively simple concepts though, there are more to these sentimental, TV movies than meets the eye. Behind many of the most successful Christmas adverts are cross-platform marketing campaigns, which capture viewers’ attention from all sides. Remember the Man on the Moon advert from John Lewis a few years back? (Check it out here if you need a refresher.) Not only did it help boost sales by up to 400%, but it also tied in quite nicely with the release of some exclusive £79.95 telescopes – which, coincidentally, sold out almost immediately.

Nowadays, just as important as the TV ad is the internet campaign that comes with it. For example, John Lewis’ advert of 2017 caused #MoztheMonster to trend on Twitter and featured Elbow’s tranquil cover of The Beatles ‘Golden Slumbers’, destined to hit many people’s playlists. Sleeping Giant Media even joined in with our own Christmas video, shared across our social channels, featuring the time when one of our biggest clients yet came to visit…

The takeaway is that if you tie your marketing campaign in across all your platforms, be it social media, in-store or on TV, you can be certain that it’ll be a very Merry Christmas.

John Lewis’ advert cost a few million pounds, but budget retailer Poundland, using only a backdrop and props from their store, has taken Twitter by storm. Posing their Elf on the shelf in ways that some of the public find ‘appalling’ and in ‘poor taste’, their social media accounts have received next level engagement and plenty of press coverage. You know what they say, there is no such thing as bad press. And, we bet you now know they sell their own version of a Toblerone.

Bring out the bots 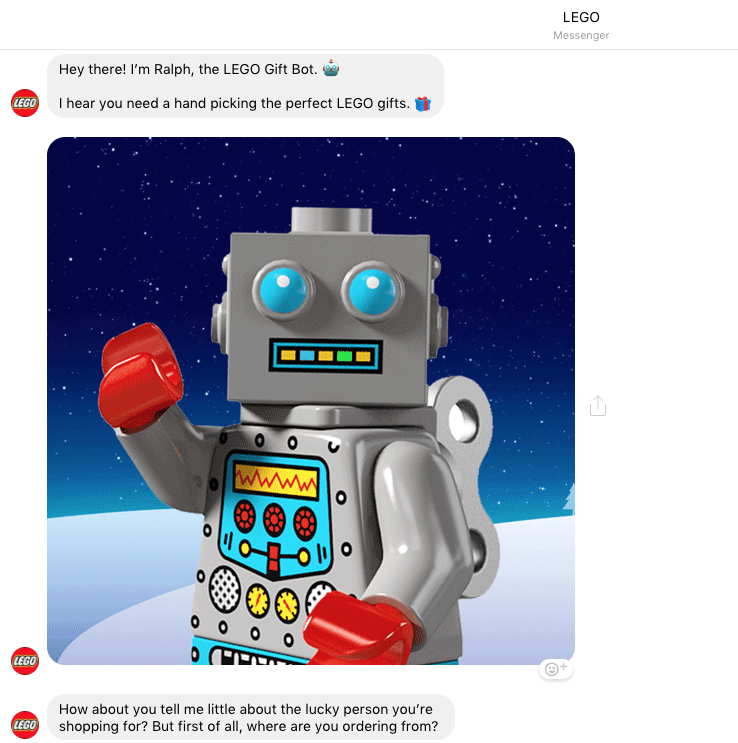 One of the neatest new tricks that retailers have taken full advantage of in 2017 is the increasing capability of social media chatbots. Searching for that perfect Christmas gift? Now retailers such as asos, Lego and M&S are using customised ChatBots to help users find stocking fillers from the comfort of their own Facebook page.

Users are first asked a few questions about the present recipient, and then the bot will supply a few choice gifts based on their answers. Not only is this a fantastic use of digital marketing, but the customisable options and personality make shopping online a fun experience. Watch this space, we predict Chatbots are going to be huge in 2018.

Christmas is often known as a time for reflection. Many people around the world use the season as an opportunity to take stock of the year’s achievements, as well as starting to make plans for how they will make 2018 a Christmas cracker of a year. #NewYearNewYou.

For businesses, this offers opportunity. Rewarding loyal customers with tantalising discounts or festive freebies are one thing, but a number of businesses are going one step further through using data in their marketing strategy.

Music moguls Spotify continued their annual trend this year, using a couple of thousands of stockings full of data to create personalised 2017 Wrapped Playlists. Spotify users can go to the website to find out interesting information, such as their most listened to songs and favourite artists of the past year. Not only is this feature extremely rewarding for long-term users, but it is also immediately shareable – and great publicity for the company.

It has also lead to some truly fantastic billboards… 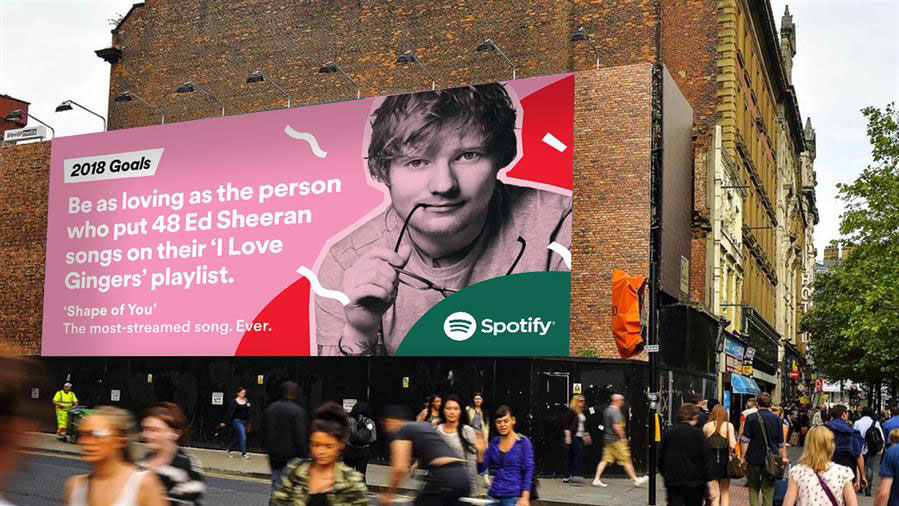 Even businesses you wouldn’t typically associate with Christmas cheer can get involved. Take the MET Office, for example, who did their own take on a Christmas campaign with a piece around how often we get snow at Christmas in the UK –  as well as the warmest, coldest, wettest and windiest Christmas days.

Christmas can be a challenging time to be a marketer due to the level of competition out there, but it can also offer really excellent opportunities for truly creative marketing. It helps to be prepared, and many businesses will already be planning how to make 2018’s Christmas even bigger and better. Make sure you get your thinking caps on early to make a bigger splash.

Ultimately, Christmas offers a chance to portray your business as customer-focused, altruistic and creative, and for many, this can be incentive enough to shell out on a couple hundred thousand soft drink cans.